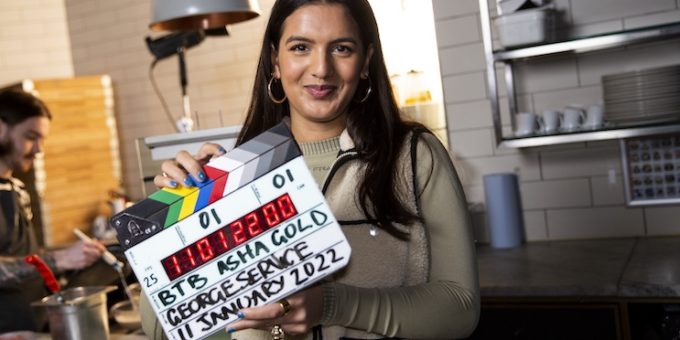 Asha Gold stars in the January edition of Behind the Base, an interview series from PizzaExpress and music therapy charity Nordoff Robbins.

The series sees the UK’s music talent talk about the power music has had on their lives whilst recreating their favourite pizza from the menu.

January’s vegan-focused episode of Behind the Base will go live on Monday 24 January and focuses on vegan artist Asha, 19 who has been featured on the likes of BBC Radio 1, BBC 1Xtra, BBC Asian Network and KISS FM.

It comes as every PizzaExpress in the country will play vegan-only music for the rest of the month.

The curated ‘Plant-based Pop’ playlist features only vegan artists, including Billie Eilish, Ariana Grande, Anderson Paak, Ellie Goulding and Moby, and is a vibey mix of soul, funk, R&B, pop and jazz – a nod to the rich musical heritage of PizzaExpress.

No songs containing any references to animal products are included in the playlist, which means no “Milkshake” from Kelis, no “Honey Sweet” from Blossoms and absolutely no “Meatloaf”.

The playlist will play in over 360 restaurants from today, including in the vegan-only PizzaExpress pizzeria in Aldwych.

“This, along with the launch of our new vegan garlic spread, is part of our commitment to making our menus and pizzerias even more inclusive and enjoyable for everyone.

“We’re also really excited to announce a ‘vegan special’ of our Behind the Base series, allowing us to shine a spotlight on a rising star whilst supporting a great cause in Nordoff Robins.”