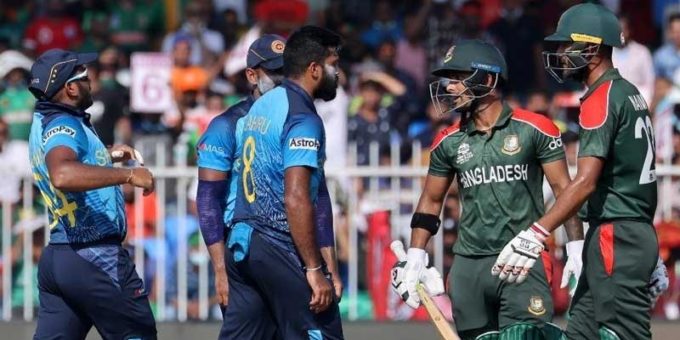 Sri Lanka defeated
Bangladesh by five wickets in a feisty T20 World Cup clash on Sunday, hammering
home their status as surprise contenders for the title.

Chasing an imposing target of 172, the 2014 champions saw
Charith Asalanka (80 not out) and Bhanuka Rajapaksa (53) lead them to victory
for a fourth successive win after three triumphs in the qualifying round.

Earlier, Mushfiqur Rahim, with an undefeated 57 and opener
Mohammad Naim, who hit 62, starred for the Tigers in the Super 12 game.

England, Australia, South Africa and West Indies are the
other teams in the group from where the top two will make the semi-finals.

Mushfiqur Rahim, with an undefeated 57 and opener Mohammad
Naim, who hit 62, starred for the Tigers after being put into bat by the 2014
champions at a hot and humid Sharjah.

Bangladesh went to 40 in the sixth over before they lost their
first wicket and the sparks flew.

Liton Das (16) was caught by Sri Lanka skipper Dasun Shanaka
at mid-off trying to hoist Lahiru Kumara into the outfield.

However, Liton and Kumara then exchanged angry words with
fellow Bangladesh opener Naim pushing away Kumara.

Both umpires had to intervene before the game continued.

Kumara went on to bowl a ‘beamer’, clocked at over 140kmh,
at Mushfiqur in the penultimate over, forcing the Bangladesh player to take
evasive action.

Naim made 62 from 52 balls before he was eventually
dismissed in the 17th over, caught and bowled by Binura Fernando.

Bangladesh had seen star all-rounder Shakib Al Hasan clean
bowled by Chamika Karunaratne for just 10 with his side on 56-2.

Naim and Mushfiqur Rahim put on 73 for the third wicket as
Bangladesh upped the pace.

The classy Mushfiqur went to his sixth T20 half century off
32 balls with four boundaries and two sixes.

Sri Lanka were without key spinner Maheesh Theekshana who
had claimed eight wickets in three qualifying matches as Sri Lanka swept into
the Super 12 stage.

The 21-year-old has been suffering with a back injury and
his place in the starting line-up went to left-arm seamer Fernando.

Bangladesh also had to come through qualifying where they
were beaten by Scotland in their opener.

Varun Dhawan just CONFIRMED that he will star in Coolie No. 1 remake and we think Sara Ali Khan might be his leading lady!
2019-03-08