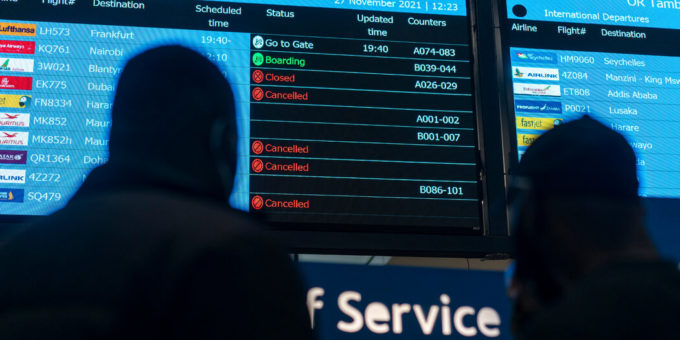 Nations in southern Africa protested bitterly on Saturday as more of the world’s wealthiest countries cut them off from travel, renewing a debate over border closures from the earliest days of the coronavirus pandemic and compounding the problems facing poorly vaccinated countries.

A new coronavirus variant called Omicron, first detected in Botswana, put governments on edge after South Africa announced a surge of cases this week, plunging countries into the most uncertain moment of the pandemic since the highly contagious Delta variant took hold this spring.

As in the early days of Delta, political alarm spread quickly across the world, with officials trading blame over how the failures of the global vaccination effort were allowing the virus to mutate, even as researchers warned that the true threat of the new variant was not yet clear.

Bearing a worrying number of mutations that researchers fear could make it spread easily, Omicron was spotted on Saturday in patients in Britain, Germany and Italy, leaving in its wake what scientists estimated to be thousands of cases in southern Africa and tens or hundreds more globally. One nation after another shut its doors to southern Africa even as they spurned public health measures that scientists said were far more urgently needed to take on the new variant.

Australia, Thailand and Sri Lanka were among the latest countries on Saturday to join the United States, Britain and the European Union in banning travelers from South Africa and nearby countries.

Israel announced the world’s strictest ban to date, sealing its borders to all foreigners for 14 days after one case was confirmed in the country.

“The key here is caution and minimal risks until we know more,” Prime Minister Naftali Bennet of Israel said at a news conference just after midnight local time on Sunday.

Health officials in the Netherlands on Saturday announced that 61 passengers on two flights from South Africa had tested positive for the virus, the latest indication of how difficult it might be to stop the variant from crossing borders.

The cascade of travel closures triggered a wave of resentment among Africans who believed that the continent was yet again bearing the brunt of panicked policies from Western countries, which had failed to deliver vaccines and the resources needed to administer them.

Richer countries, having already hoarded vaccines for much of 2021, were now penalizing parts of the world that they had starved of shots in the first place, scientists said.

“Told you so,” said Francois Venter, a researcher at University of the Witwatersrand in Johannesburg, referring to warnings from African researchers that delaying vaccinations there risked the emergence of new variants. “It feels like these rich countries have learned absolutely nothing in terms of support.”

The sense of outrage was most visceral in South Africa, where business leaders predicted a dire economic toll, especially on tourism. In the arrivals halls of Johannesburg’s O.R. Tambo International airport, Ronald Masiwa, a tour operator, watched with dread as the information board flipped to red, displaying cancellation notices. Three clients had already canceled trips overnight, and he feared that many more would follow.

Some health officials said that the travel bans may buy some time to figure out how to deal with the new variant. But just as border closures a year ago did little to stop the spread of an earlier coronavirus variant from Britain, scientists said, the latest travel shutdowns had likely come too late.

Scientists worried that the restrictions would discourage other nations from reporting variant cases, out of fear of being slapped with travel bans. Border closures have provoked debate during a succession of public health crises, including the Ebola outbreak in 2014, with global health officials warning that such bans can interrupt the flow of medical supplies and do economic damage that makes countries reluctant to report health threats.

The chaotic introduction of the closures in Amsterdam on Friday left some 600 passengers on two flights from South Africa crammed into planes and then unventilated rooms for about 30 hours. Those who avoided hotel quarantines by testing negative scattered to other destinations after receiving results around 3 a.m. on Saturday.

It remains unclear whether the Omicron variant will transmit as easily as global health officials fear. The variant may simply have been in the right place during a surge of new infections in South Africa, making it appear more contagious than it really is.

But experts said the border closures would wreak havoc in African countries that were counting on reopening. In South Africa, December is traditionally the high season for tourism, one of the country’s biggest industries, and operators had been banking on a surge in visitors from Britain, which had removed South Africa from its “red list” only last month.

“This is devastating,” said David Frost, chief executive officer of the Southern Africa Tourism Services Association. “Many companies have been hanging on by their fingernails, and this is going to wipe them out. It’s going to be dire for conservation, and it’s going to be dire for people in rural areas where tourism is the only economic generator.”

South Africa’s number of daily infections — 2,828 on Friday — was a small fraction of case counts in countries with similarly sized populations, like Germany and Britain, not to mention the United States. For Mr. Frost, the hurried measures were the mark of a blatant double standard.

Just over 10 percent of people in Africa have received one dose of a vaccine, compared with 64 percent in North America and 62 percent in Europe.

For the countries imposing travel bans, scientists said, far more consequential than delaying the arrival of new Omicron cases was the question of what they would do with whatever time they had bought themselves to respond.

At home, scientists said, those countries should ramp up testing and vaccinations and help infected people isolate, especially given the difficulties they were already having containing the Delta variant. Scientists pleaded with countries to match those efforts globally, including with aid to southern Africa for their health systems and vaccination and variant-tracking efforts.

“If all we do is a travel ban, and we don’t increase testing at airports or provide resources for people to isolate if they do test positive so they can justify missing work — all of that would have to be happening to reduce community transmission,” said Joseph Fauver, an assistant professor studying genomic surveillance at the University of Nebraska Medical Center.

After decades of skepticism toward border closures among global health officials, Covid-19 forced experts to re-examine their views, said Alexandra Phelan, a professor studying global health policy at Georgetown University. “We gained a bit of nuance, and realized that travel restrictions have a potential role to play in slowing the spread of a new respiratory disease, even though it doesn’t stop it,” she said.

Still, Dr. Vespignani and his colleagues have shown that even the strictest travel restrictions only modestly delay the spread of the virus without other efforts to cut transmission. And whereas countries had some hope in early 2020 of tracing the contacts of patients from abroad, sequencing the virus takes too long to allow health officials to pick out people infected with the Omicron variant for special containment measures.

“They get dispersed in a sea of thousands and thousands of infections,” Dr. Vespignani said of any new cases of the Omicron variant. “It’s a very, very, very tough situation.”

The latest variant has already shown signs of spreading locally beyond southern Africa. A patient in Belgium, for instance, had no connections with southern Africa, having traveled recently to Egypt, officials said.

Several scientists said they suspected that the variant had been spreading undetected in countries with lackluster sequencing efforts before it surfaced in Botswana and South Africa, giving it more time to scatter globally. Nevertheless, European nations did not find the variant until after South Africa alerted them to it, demonstrating the gaps in their own surveillance efforts.

The variant had plenty of opportunities to spread: In November, there were 334 flights scheduled out of southern Africa into Europe, with a capacity of nearly 100,000 seats. And three dozen flights were scheduled from Johannesburg into the United States this month.

Given the uneven global sequencing efforts, Jennifer Nuzzo, an epidemiologist at Johns Hopkins University, said that it was difficult to target individual countries for border closures. She warned that travel bans created a false sense of security, giving cover to elected leaders who wanted to avoid more difficult choices.

“The notion of having a global map of where the variants are and aren’t is just fantasy,” she said. “I don’t think the travel bans really have much of an impact, other than answering the political pressures that inevitably arise when a new variant emerges.”

Shabir Madhi, a virologist at University of the Witwatersrand, Johannesburg, cautioned that the Omicron variant could yet fizzle out, as other seemingly worrisome versions of the virus had done. He said it was a reflection of a lack of political and economic power that southern Africa was so quickly cut off by wealthy countries despite the uncertain evidence.

With roughly a third of South Africans vaccinated, officials there blame a number of factors, including vaccine hesitancy caused by rampant online misinformation. Some critics have blamed a bungled government response. For now, South Africa has far more vaccine doses than it can distribute in time, forcing senior health officials to defer some planned deliveries.

Other African countries where shortages have eased are also reporting difficulties getting vaccines into people’s arms. Many lack the necessary freezers and other storage capacity. Last month, Uganda warned that two-thirds of the 9 million vaccines it had received risked expiring by the end of the year.

In the United States, health officials say they are better equipped to track variants than earlier in the pandemic. Scientists can identify Omicron with a standard nasal swab test, giving them a leg up in tracking the spread of the variant.

But the United States is suffering so many daily infections that many samples are being overlooked. And there are pockets of the country where relatively few cases are being sequenced. In the last 90 days, for instance, Massachusetts sequenced a fifth of all coronavirus cases in the state, according to an online sequencing database. Texas and Florida, on the other hand, did so for only four percent of cases.