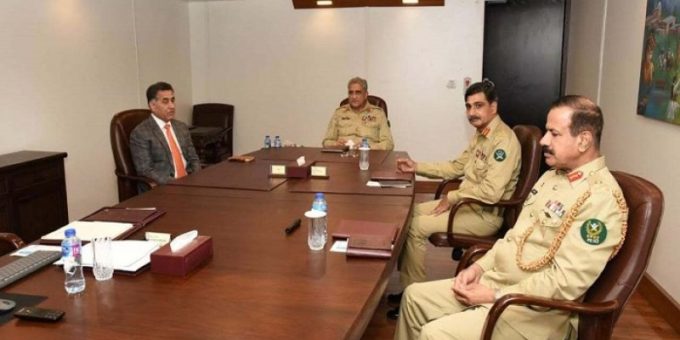 The COAS was briefed on “internal security and the ongoing situation in Afghanistan”, the statement from the Inter Services Public Relations (ISPR) said.

General Bajwa expressed his satisfaction over the preparedness of the organisation, it added.

The Army chief’s visit to the ISI headquarters comes amidst an alleged standoff between the military and the government over the appointment of the new spymaster. The army had announced on October 6 that the incumbent ISI chief, Lt Gen Hameed, had been made the Peshawar corps commander, while Lt Gen Nadeem Ahmed Anjum was appointed in his place.

But the Prime Minister’s Office has since not issued an official notification of Lt Gen Anjum’s appointment, leading to rumours about strains in civil-military relations.

After days of speculations, on Oct 12, Information Minister Fawad Chaudhry had said that the authority to appoint the ISI chief lay with the prime minister, and that the set procedure would be followed for the purpose.

“The legal procedure will be followed in the appointment of the new DG ISI, for which both [Gen Bajwa and Prime Minister Imran] are in agreement,” he had said.

Chaudhry had said that PM Imran and the army chief had a “long sitting” the previous night to discuss the matter and the premier had subsequently taken the cabinet into confidence over the issue.

“Gen Bajwa and the prime minister have close and cordial relations. And it is also important from a historical perspective that there are ideal relations between Pakistan’s civilian and military leaderships,” he had added.

On Saturday, Interior Minister Sheikh Rashid Ahmed claimed that the issue of the ISI chief’s appointment had been amicably settled between the civil and military leadership. He said the spymaster would be appointed before Friday.

Rejecting reports of a rift between the government and the military establishment, he said the prevailing environment in the country was fine, and regretted that “some elements are trying to make highly sensitive institutions controversial.”

Earlier today, the ISPR said in a press release that Lt Gen Muhammad Aamer had assumed command as the new Gujranwala corps commander.

Lt Gen Aamer was handed over the command of Gujranwala Corps by Lt Gen Syed Asim Munir – who has been appointed as the quarter master general – at a change-of-command ceremony held at Gujranwala Cantonment, according to the release.

Lt Gen Aamer’s posting as the Gujranwala corps commander was among the six appointments announced by the military in a reshuffle on October 6, which included that of the DG ISI.

Before his new assignment, Lt Gen Amir was serving as the adjutant general. He has also served as the General Officer Commanding Lahore.