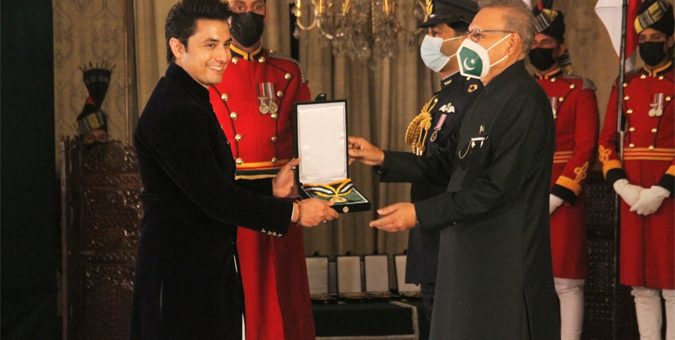 Singer and actor Ali Zafar has been awarded the highest literary award, Pride of Performance, for his meritorious contribution and achievements in the field of arts and music.

The singer received the award from President of Pakistan Arif Alvi at ceremony at the President House, Islamabad.

Ali Zafar’s mother Professor Dr Kanwal Ameen and his wife Ayesha Fazli accompanied him to the prestigious ceremony where he, along with eminent scientists, writers and actors, was awarded the Pride of Performance.

In his Tweet after receiving the award, Zafar said, “I bow down my head in humility for this honour. Thank you for your prayers, support and well wishes. I pledge to do as much as I can for the arts, the artists, my country and the people.”

Prof. Kanwal Ameen said Ali is a self-made young man and she’s very proud of him.

In his Tweet after receiving the award, Zafar said, ‘I bow down my head in humility for this honour. Thank you for your prayers, support and well wishes. I pledge to do as much as I can for the arts, the artists, my country and the people’

Ayesha Fazli said Ali Zafar was not only a talented singer, actor and writer, but also a very kind-hearted and inspiring human being who shares his fortunes with those in need. “Only during the lockdown due to COVID, the Ali Zafar Foundation distributed ‘Rashan’ and cash among 11,000 families, and extended financial help to 850 distressed musicians and the transgender community,” she said.

Born to a middle class family, Ali Zafar’s journey is an inspiration to many. His parents were university teachers and he was the eldest of three brothers. When Ali turned 18, he decided to help his family and earn money to pursue his passion in music. In mornings, he would attend classes at NCA and spend evenings in making sketches in the hotel lobby of Pearl Continental, Lahore.

He earned about thirty thousand rupees initially from sketching, from which he bought an amp, keyboard and mic. Nabila and Khawar spotted him making the sketches and signed him on as a model for a designer shoot which was his first big break. It was after this shoot that he began getting offered drama roles. He was selected in an audition for Kaanch ke Par and also appeared in Marasim, Landa Bazaar and Kollege Jeans. He quit dramas to keep working on his musical career and Channo, Huqa Pani and Masty became legendary albums of the time.

About eleven years ago, ‘Tere Bin Laden’ released and actor and singer Ali Zafar became the first Pakistani who was cast and launched in India as a main lead, opening doors for many other actors to work in Bollywood. Since then, he has worked in seven Bollywood films in lead roles opposite Bollywood leading actresses such as Katrina Kaif, Parineeti Chopra, Yami Gautum, Taapsee Pannu, Aditi Rao Hydari and Alia Bhatt. He starred in several Indian hits such as ‘Tere Bin Laden’, ‘Mere Brother Ki Dulhan’, ‘Chashme Baddoor’, ‘Kill Dil’, ‘London, Paris, New York’ and ‘Dear Zindagi’ which makes him the most prolific Pakistani actor to have worked across the border.

In 2018, Ali Zafar launched his own production house Lightingale Productions and wrote, produced and acted in his debut Pakistani film ‘Teefa in Trouble’ which broke several records and became the highest ever non Eid holiday blockbuster with a business of Rs 50 crore internationally. He won the award for Best Actor for his epic portrayal of the character named Teefa that went on to become a household name.

His foundation has been acknowledged for philanthropic work in the fight against Covid-19. Besides relief work during the pandemic, Ali Zafar Foundation is supporting education of hundreds of girls in different schools.

Indigenous man says he can sell cannabis without B.C. licence because of UN declaration

Miheeka Bajaj styled her sari with a gorgeous dupatta for engagement with Rana Dagubatti; check it out here
2020-05-23