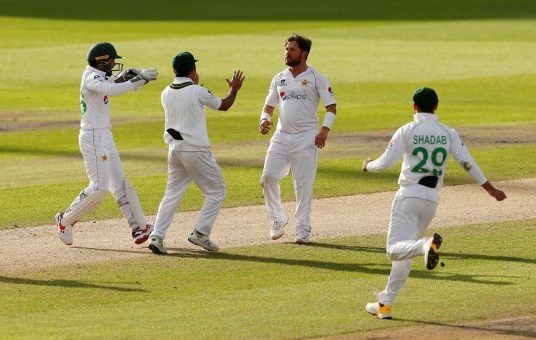 England fast bowler Jofra Archer believes his side lacked luck after another disappointing display with the ball has left them facing a sizeable first innings deficit after day two of the first test against Pakistan on Thursday.

England have bowled well in both morning sessions of the test, but wilted badly after lunch on each occasion with wayward line and length, and some sloppy fielding, to allow the tourists to amass a highly competitive 326 in their first innings.

Pakistan were much sharper with the ball at Old Trafford and have England, with their long tail that sees Chris Woakes come in at number seven, struggling at 92 for four on a wicket that is already showing signs of wear.

“I don’t think it went our way, a lot of balls we bowled today beat the bat or got the edges (that didn’t carry to fielders),” Archer told reporters at the close of play.

“Pakistan batted well and put on some pressure after lunch. But I think if it went that way in another test, we probably would have had them eight or nine down in a couple of sessions.”

Archer came in late in the innings to wrap up the Pakistan tail and finish with impressive figures of 3-59.

It was noticeably not the usual firebrand Archer though, and he conceded to bowling within himself, suggesting the wicket does not give sufficient reward for the fast bowlers.

“This wicket is not really one where you will try to bend your back. There was a little bit there in the morning, but you saw it is now spinning on day two.”