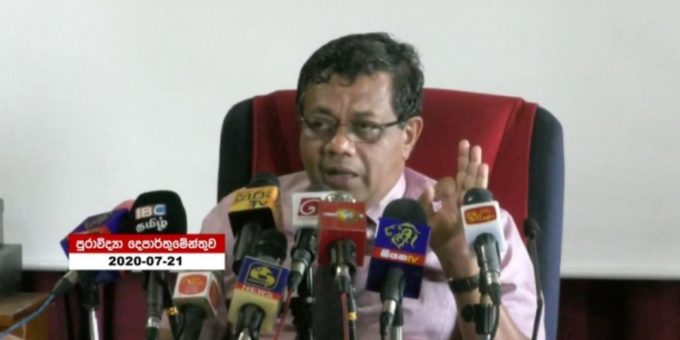 Colombo (News 1st); Director-General of Archaeology, Professor Senarath Dissanayake on Tuesday (21) said an Ex-Minister wanted him to release an area from a protected reservation for a hotel project.

He said a businessman had approached the then minister to secure 15 acres from the Kaludiya Pokuna forest and archaeological site for a hotel project and the Ex-Minister had instructed him to facilitate the process.

Professor Dissanayake speaking to reporters said the entire reservation is around 85 acres and the businessman had sought to secure the area with the most number of caves, to be converted into a hotel to attract foreigners.

The Kaludiya Pokuna forest and archaeological site in an area that dates back to the 02nd century BC said the Director-General of Archaeology.

Dissanayake said he vehemently opposed to this move despite orders being made by the Ex-Minister or from those above.

Further, Director General of Archaeology Professor Senarath Dissanayake said he is preparing to file a defamation case against an Ex-Minister seeking Rs. 01 Billion in damages.

Speaking to reporters on Tuesday, Professor Dissanayake said when he was removed from his position by the former government, he was re-instated by then-President Maithripala Sirisena citing his removal was unlawful as opposed to what the Ex-Minister had to say.

On Monday (20), Ex-Minister Akila Viraj Kariyawasam said Professor Dissanayake was removed following an investigation which claimed he was connected to malpractices.

Professor Dissanayake said he is in possession of telephone conversation recordings, to prove his claims with regard to the proposed hotel project and will release them after legal action is filed.

Rishi Kapoor to return to sets for Hitesh Bhatia’s untitled next on THIS date : Bollywood News
2019-12-04