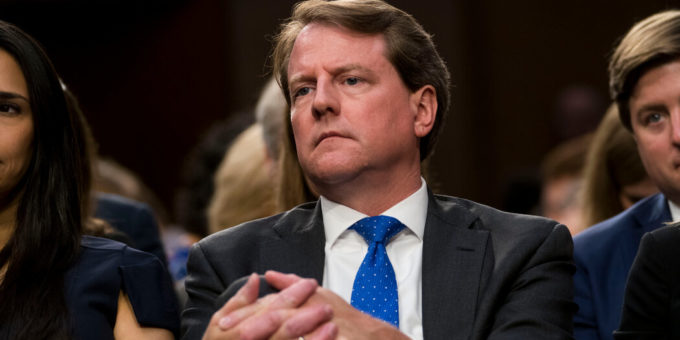 WASHINGTON — The Justice Department subpoenaed Apple for information in February 2018 about an account that belonged to Donald F. McGahn II, President Donald J. Trump’s White House counsel at the time, and barred the company from telling him about it, according to two people briefed on the matter.

Apple told Mr. McGahn about the subpoena last month, said one of the people, who spoke on the condition of anonymity to discuss the matter. Mr. McGahn’s wife also received a similar notice from Apple, the person said.

It is not clear what F.B.I. agents were investigating, whether Mr. McGahn was their specific focus or whether he was swept up in a larger net because he had communicated with someone who was under scrutiny. As the top lawyer for the 2016 Trump campaign and then the White House counsel, Mr. McGahn was in contact with numerous people who may have drawn attention either as part of the Russia investigation or a later leak inquiry.

Still, the disclosure that agents had collected data of a sitting White House counsel, which they kept secret for years, is extraordinary.

And it comes amid a political backlash after revelations that the Trump administration secretly seized the personal data of reporters and Democrats in Congress from phone and tech companies while investigating leaks.

Democratic leaders on Capitol Hill on Sunday ratcheted up pressure on the Justice Department and former officials to provide a fuller accounting of events. They called on the head of the Justice Department’s national security division, John C. Demers, and the former deputy attorney general, Rod J. Rosenstein, to testify before Congress along with the former attorneys general Jeff Sessions and William P. Barr.

A Justice Department spokesman declined to comment, as did a lawyer for Mr. McGahn. An Apple representative did not respond to a request for comment.

Apple told Mr. McGahn that it had complied with the subpoena in a timely fashion but declined to tell him what it had provided the government, according to a person briefed on the matter. Under Justice Department policy, gag orders for subpoenas may be renewed for up to a year at a time, suggesting that prosecutors went to court several times to prevent Apple from notifying the McGahns earlier.

In investigations, agents sometimes compile a large list of phone numbers and email addresses that were in contact with a subject, and seek to identify all those people by using subpoenas to communications companies for any account information like names, computer addresses and credit card numbers associated with them.

Apple told the McGahns that it had received the subpoena on Feb. 23, 2018, according to a person briefed on the matter.

Under federal law, prosecutors generally need to obtain permission from a federal judge in order to compel a company like Apple to delay notifying people that their personal information has been subpoenaed, said Paul M. Rosen, a former federal prosecutor and a partner at Crowell and Moring.

“There is a lot here we don’t know, including the facts and circumstances surrounding the request for the delay and what was presented to the judge,” Mr. Rosen said. But, he added, prosecutors typically need to prove that either notifying the person “would endanger someone’s safety, risk the destruction of evidence or intimidation of witnesses, or seriously jeopardize an investigation.”

The subpoena was issued by a grand jury in the Eastern District of Virginia, the other person familiar with the matter said.

It is not clear why prosecutors obtained the subpoena. But several notable developments were unfolding around that time.

The federal court in the Eastern District of Virginia was the center of one part of the Russia inquiry led by the special counsel, Robert S. Mueller III, that focused on Paul Manafort, a former chairman of the 2016 Trump presidential campaign.

Because Mr. McGahn had been the top lawyer for the Trump campaign in 2016, it is possible that at some earlier point he had been among those in contact with someone whose account the Mueller team was scrutinizing in early 2018.

Notably, Mr. Manafort had been hit with new fraud charges unsealed the day before the subpoena. Subsequent developments revealed that Mr. Mueller’s investigators were closely scrutinizing some of his communications accounts in the following days.

It was also around that time that Mr. McGahn was involved in another matter related to the Russia investigation, one that included a leak.

In late January 2018, The New York Times reported, based on confidential sourcing, that Mr. Trump had ordered Mr. McGahn the previous June to have the Justice Department remove Mr. Mueller, but Mr. McGahn had refused to do so and threatened to resign. The Washington Post confirmed that account soon after in a follow-up article.

The Mueller report — and Mr. McGahn in private testimony before the House Judiciary Committee this month — described Mr. Trump’s anger at Mr. McGahn after the Times article and how he had tried to persuade Mr. McGahn to make a statement falsely denying it. Mr. Trump told aides that Mr. McGahn was a “liar” and a “leaker,” according to former Trump administration officials. In his testimony, Mr. McGahn said that he had been a source for The Post’s follow-up to clarify a nuance — to whom he had conveyed his intentions to resign — but he had not been a source for the original Times article.

There are reasons to doubt that Mr. McGahn was the target of any Justice Department leak investigation stemming from that episode, however. Information about Mr. Trump’s orders to dismiss Mr. Mueller, for example, would not appear to be a classified national-security secret of the sort that it can be a crime to disclose.

Yet another roughly concurrent event was a Justice Department investigation into unauthorized disclosures of information about the Russia inquiry. As part of that investigation, prosecutors sent Apple a subpoena on Feb. 6, 2018, for data on congressional staff members, their families and at least two members of Congress. Apple only recently informed those targeted because it had been prohibited from disclosing the subpoena at the time.

Among those whose data was seized were two Democrats on the House Intelligence Committee: Representatives Eric Swalwell and Adam B. Schiff, both of California. Mr. Schiff, a sharp political adversary of Mr. Trump, is now the panel’s chairman. The Times first reported on that subpoena last week.

Many questions remain unanswered about the events leading up to the subpoenas, including how high they were authorized in the Trump Justice Department and whether investigators anticipated or hoped that they were going to sweep in data on the politically prominent lawmakers. The subpoena sought data on 109 email addresses and phone numbers.

In that case, the leak investigation appeared to have been primarily focused on Michael Bahar, then a staff member on the House Intelligence Committee. People close to Mr. Sessions and Mr. Rosenstein, the top two Justice Department officials at the time, have said that neither knew that prosecutors had sought data about the accounts of lawmakers for that investigation.

It remains unclear whether agents were pursuing a theory that Mr. Bahar had leaked on his own or whether they suspected him of talking to reporters with the approval of lawmakers. Either way, it appears they were unable to prove their suspicions that he was the source of any unauthorized disclosures; the case has been closed, and no charges were brought.

Speaker Nancy Pelosi on Sunday called for Mr. Barr, Mr. Sessions and Mr. Rosenstein to testify before Congress about the subpoenas. She said that what the Justice Department did under Mr. Trump went “even beyond Richard Nixon” but declined to say whether a congressional committee would compel their testimony.

“Let’s hope they will want to honor the rule of law,” she said. “The Justice Department has been rogue under President Trump.”

Senator Chuck Schumer of New York, the majority leader, called for anyone potentially involved in the subpoenas, including Mr. Demers, to testify before Congress. “The sins of the Trump administration just continue to pile up,” he said at a news conference in New York.

“This was nothing less than a gross abuse of power, an assault on the separation of powers,” Mr. Schumer said, warning that if the men would not testify, lawmakers would subpoena them.

He also called on Senate Republicans to join Democrats in voting for congressional subpoenas to compel testimony.

On CBS, Senator Susan Collins, Republican of Maine, called the allegations “serious” but said only that she was backing an investigation into the matter by the Justice Department’s independent inspector general that was announced on Friday.

India coronavirus: 'I lost my father and pregnant wife to Covid'

7 lesser known facts about Aamir Khan’s Lagaan: When the British team defeated the Indian side