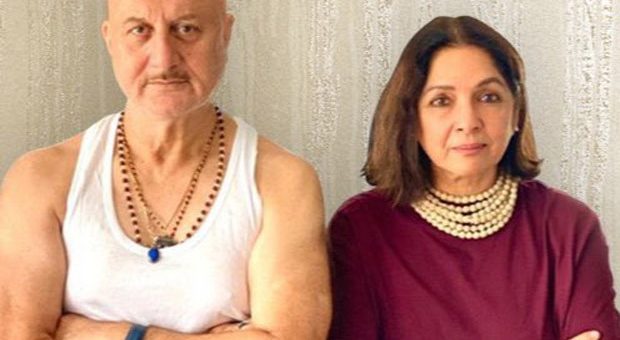 Senior actor Anupam Kher recently disclosed details of his 519th film along with the poster of the film. The film will also star Neena Gupta who is in the best form in her career at present. Anupam Kher took to Instagram to unveil the first look poster of his upcoming film Shiv Shastri Balboa featuring him with Neena. He revealed that the movie will be a fascinating tale of survival of an Indian in a small town in America.

“Delighted to be working with the gorgeous and brilliant @neena_gupta and a very interesting and talented international cast and crew!! More details and surprises to follow!! Jai Ho!!,” he wrote while unveiling the first look poster.  In the poster, both Anupam and Neena are seen sitting on a bench with their hands crossed across their chest. Both are wearing pearl necklaces. While Anupam is seen wearing a white banyan and blue jeans, Neena looks gorgeous in a maroon dress with short hair.

The movie will be directed by Ajayan Venugopalan under the banner UFI Motion Pictures Pvt Ltd. Ajayan is known for writing and directing the acclaimed Malayalam television sitcom Akkara Kazhchakal which was followed by a movie of the same name.

36 Dead In Landslides In Rain-Hit Maharashtra; Evacuation With Choppers