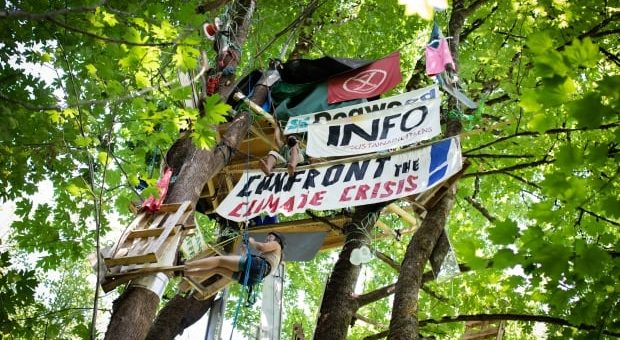 Tim Takaro first ascended the trees of the Brunette River Conservation Area on August 3, 2020. Over a year later, he and other protesters still occupy the treetops.

Takaro, an SFU professor and retired physician, is one of the leaders of StopTMX, the group behind the lengthy treetop protest of the Trans Mountain pipeline expansion project.

“We have to stop building new fossil energy infrastructure or we are going to face even more death and destruction than we’ve already seen,” Takaro said.

The expansion project will twin the existing 1,150-kilometre pipeline, increasing the amount of petroleum it carries from Alberta to British Columbia’s coast from 300,000 to 890,000 barrels per day.

The project has been contested by several groups including Indigenous activists, environmental organizations, and municipal governments. While these groups have taken their fight to the streets and the courts, StopTMX has taken it to the trees.

With a team of about 40 people, they always have at least one person occupying each of their two tree houses, usually switching off every two to five days. The group consists of a wide range of activists, from teenagers to elders.

Food, water, and other supplies are delivered to the main tree house using a system of pulleys. The protesters are able to go up and down with climbing equipment, and can walk in between the tree houses on a ladder walkway that connects the two.

Maureen Curran joined the treetop protest last summer, and has been involved ever since. She was recently named the Burnaby-South candidate for the federal Green Party, and will be running against NDP Leader Jagmeet Singh in the upcoming election.

Curran described her time spent in the treetops as “surprisingly peaceful” despite the noise from the nearby train tracks and traffic from the highway.

“The birds come to visit. I got to watch a hawk hunt for its dinner one night … it really changes your perspective.”

Takaro believes the protest has been successful so far.

Following two on-site inspections in April, an enforcement officer from Environment and Climate Change Canada ordered Trans Mountain to halt construction in the area until August 15 due to bird nesting season.

According to Takaro, the enforcement officer was there to witness a tree with a hummingbird nest being cut down.

“The mighty hummingbird has been able to stop this project since April.”

‘There’s no vaccine for climate change’

Takaro estimates Trans Mountain has already cut about half of the 1,275 trees they say need to be cleared from the area.

Trans Mountain did not respond when asked how many trees they have cleared from the area so far, but said they are still on track for “mechanical completion of the project by the end of 2022, with commercial operations commencing shortly thereafter.”

Takaro, whose group would like to see the project cancelled, notes the economics of the project grow “worse by the day.”

“We are counting a victory every day that construction is not happening in this place.”

In February 2020, Trans Mountain CEO Ian Anderson announced the cost of building the expansion had increased from an initial estimate of $7.4 billion to $12.6 billion.

“COVID is taking lives every day and causing damage every day. So is climate change and it’s accelerating,” said Curran.

“We have a vaccine that can get rid of COVID. There is no vaccine for climate change.”