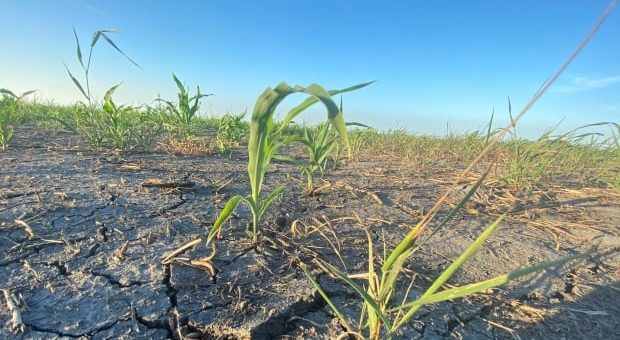 Another rural municipality in Manitoba has declared a state of agricultural disaster — the second municipality in less than a week following a season of relentless heat, record-breaking temperatures and drought.

On Friday, the rural municipality of Armstrong in the Interlake region north of Winnipeg declared a disaster after a week of hot temperatures and just before a weekend heat wave where temperatures reached the mid-30s C.

The move came less than a week after the neighbouring rural municipality of St. Laurent declared a state of disaster of its own.

The rural municipality of Armstrong is requesting immediate assistance from the federal and provincial governments to provide support to farmers for tax deferrals, feed shortages, freight assistance and compensation for additional wells being drilled, according to minutes from a special council meeting on Friday.

For part of the day on Monday, Manitoba saw a little bit of rain, but for many farmers it wasn’t enough to reverse a season marred by relentless heat, record-breaking temperatures and drought.

The municipality says it has received less than 40 per cent of the normal amount of rain so far this year, crop yields are coming in at excessively low volumes, and dugouts and wells are dry or drying up.

The drought in her area has caused a surge in grasshoppers, she said, which completely decimated her crop of oats.

“We’ve got no crop at all because of the grasshopper damage.”

Luckily, Nikkel says her crop was fairly good in past years, and she’s been able to store enough oats to last two years.

Not everyone has been so lucky.

Brad Erb, a grain farmer and the reeve of the Rural Municipality of McDonald just southwest of the City of Winnipeg says he’s grateful to see a little rain, but it isn’t enough.

Looking out on his dry, pale field is depressing, he said.

“In a normal year, this crop would be waist-high or higher, a lush yellow and green and look very healthy. Right now we have a plant that is struggling, it’s under stress, it’s pale, it’s off-yellow,” he said.

“This is a crop under big stress.”

WATCH | Brad Erb gives a tour of his drought-stricken field:

Brad Erb, a Manitoba grain farmer and reeve of the Rural Municipality of Macdonald, shows the damage done to one of his canola fields by drought conditions and high temperatures. Erb said future rain could help farmers in the area, but it’s already too late for certain crops this season. 1:16

On Wednesday, Premier Brian Pallister told reporters he has toured parts of the Interlake area. He said discussions about what the province can offer in terms of aid will happen soon.

In a statement, a spokesperson for Manitoba Agriculture Minister Blaine Pedersen said the department is closely monitoring conditions across the province and is in discussions with impacted groups to see how the province may be of additional assistance.

Diljeet Brar, the NDP’s agriculture critic wants to see the province provide additional measures to help farmers, including signing onto the federal AgriStability program, which is designed to help producers manage large income declines like the ones some Manitoba farmers are experiencing.

Producers receive a payment if their production margins in the current year falls below their historical reference margin by more than 30 per cent.

“That’s how we can help our farmers, our farm organizations are also asking for this help,” Brar said. “But unfortunately the [Pallister] government is not positive about these steps, so far. I expect they get up, and stand with the farmers in this tough situation,” Brar said.

In the meantime, both Nikkel and Erb just want to see more rain.

Manitoba saw a bit of rain today, but it just isn’t enough to help out farmers, who are severely hit by this year’s drought and hot weather. There are calls for the province to help producers during this difficult season. 2:01

There is no place for writers like me in today’s drama industry: Anwar Maqsood