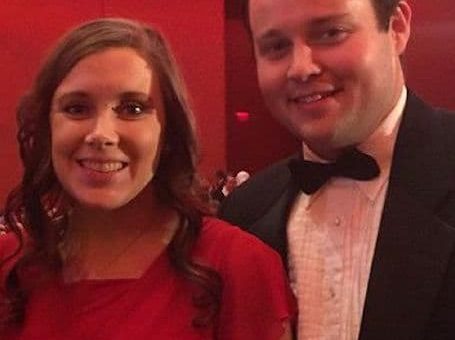 Anna Duggar has not yet said a word in the wake of her husband’s arrest and subsequent conviction on a pair of sex abuse charges.


But an unnamed insider has now spoken out on Anna’s half.


According to this In Touch Weekly source, the mother of seven isn’t sitting at home these days and cursing off her husband or wondering what the heck Josh was thinking when he downloaded illicit material of kids under the age of 12.


Instead, Anna is reportedly STILL sticking up for her disgusting husband.


And she’s irate that his brothers and sisters aren’t doing the same.


“Anna is still speaking to [Jim Bob Duggar] and [Michelle Duggar], but a lot of the siblings have distanced themselves,” this taboid claims.


“She was upset that some family members decided to speak out against Josh. That broke her heart.”


Over the course of Josh’s recent trial in Arkansas this month, Anna was spotted holdding hands with her husband while walking into the local courthouse.


She was often seen with a smile on her face as well.


Throughout the summer, meanwhile, Anna supposedly ditched her kids and spent many nights with Josh under the roof of the guardians who were placed in charge of him after the ex-reality star was taken into custody last April.


She also continued to believe Josh was innocent.


It sounds, somehow, as if Anna still believes this.


The disgraced former TLC personality will be sentenced some time around March and faces up to 20 years and $250,000 in fines for each count.


Added In Touch in its latest report:


“[Jill Dillard‘s (née Duggar)] and her husband [Derick Dillard] are happy that justice was served.


“[Jinger Duggar Vuolo] called Josh a hypocrite and said that [she was] praying for his soul.


“Some of the relationships may be salvageable, but Anna says that’s only because of her faith and the power of forgiveness.”


It certainly is accurate to say that Josh’s siblings have held little back in their public responses to their brother’s conviction.


How could they do otherwise?


It’s now been proven that Josh has committed almost as heinous of a crime as one can commit.


“From the moment we learned about this case against Josh we have prayed that God would cause the truth to be known, no matter what it was, and that the facts would be followed no matter where they led,” Jessa, for example, wrote.


“We are grieved beyond words over the children exploited and abused in child sexual abuse material, and we are thankful for our justice system in its punishment of such evils.


“Our hearts break for Josh’s family, and we ask your continued prayers for them in the unfathomable grief and pain they are suffering.


“This is a firm statement about the true victims here.”


In an Instagram post last Friday, Jinger Duggar, who is married to Jeremy Vuolo, wrote the following:


“We are saddened for the victims of horrific child abuse. We are also saddened for Josh’s family, his wife and precious children…


“We are grateful for justice. We are praying for further justice, vindication, protection, and healing for all those who have been wronged.”


And here is what Jill and her husband had to say:


Our hearts go out to the victims of child abuse or any kind of exploitation.


We are thankful for the hard work of law enforcement, including investigators, forensic analysts, prosecutors, and all others involved who save kids and hold accountable those responsible for their abuse.


Nobody is above the law. It applies equally to everybody, no matter your wealth, status, associations, gender, race, or any other factor…


Josh’s actions have rippled far beyond the epicenter of the offense itself. Children have scars, but his family is also suffering the fallout of his actions.


Our hearts are sensitive to the pains Josh’s wife, Anna, and their seven children have already endured and will continue to process in the future. This trial has felt more like a funeral than anything else.


Josh’s family has a long road ahead.


We stand with them, we are praying for them, and we will seek to support them however we can during this dark time.