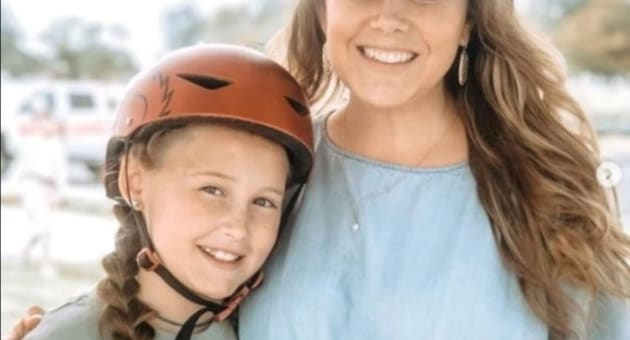 Anna Duggar is used to taking criticism from strangers on the internet.


The woman is married to Josh Duggar, after all.


But one thing Anna is not used to is taking flak for her parenting.


One could argue that remaining married to a known child molester makes Anna a pretty awful mom — and one would be right.


However, Duggar fans don’t see it that way.


To them, Anna is a paragon of patience and forgiveness, having stood by her man’s side, even as one sex scandal after another made tabloid headlines.


Some of these people see divorce as a greater sin than anything Josh did.


And to them, Anna demonstrated her devotion to the weird fundamentalist cult she married into by remaining married.


Josh and Anna welcomed their sixth child late last year, and those who know her best say Anna is a supremely devoted mother.


However, it’s beginning to look like she may have overextended herself just a bit.


Josh and Anna’s oldest, daughter Mackynzie, celebrated her 11th birthday over the weekend.


Even though the Duggars believe the coronavirus is a hoax, it seems they’ve accepted that giant family gatherings for every birthday are simply not feasible for the time being.


So Josh, Anna, and the kids celebrated at a local bike park.


Anna posted pics from the occasion, along with a caption in which she sang her daughter’s praises:


“Mackynzie has a love for learning and she is such an amazing young lady,” she continued.


“She is a radiant blessing to everyone around her, she loves others and she loves Jesus! We are so blessed to have her as our oldest kiddo!” Anna concluded.


It’s pretty boilerplate, run-of-the-mill birthday stuff, and to some commenters, that’s the problem.


“Is Anna just so lazy that she had to copy the formatting from all of the other Duggar birthday posts…” one follower wrote.


“She didn’t say anything personal about her. And couldn’t she have picked a better picture?” another asked.


“It’s great she’s wearing a helmet at the bike part but kinda weird Anna,” a third chimed in, adding:


“The bar is literally that low.”


Look, we get it — the Duggars all pride themselves on being these flawless super-parents, and Anna’s caption sounds like it was written by someone who met Mackynzie once, when she was like four.


As we often do in situations like this one, we’d like to remind you that there are many, many legitimate reasons for making fun of the Duggars, which means there’s really no reason to go digging deep.


So if you have to mock Anna, maybe just stick with the really obvious stuff like the fact that she’s still married to Josh and forget about the mom-shaming quibbles.

Delhi’s Education Board To Be Operational By Next Year: Manish Sisodia
2020-08-09