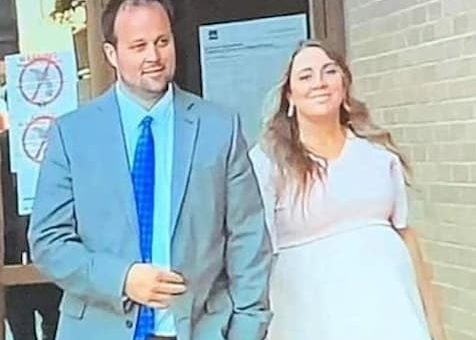 The Josh Duggar child pornography trial got underway in Fayetteville, Arkansas this week.


On Monday, Josh’s father, Jim Bob Duggar, took the stand at a pre-trial evidentiary hearing at which he claimed to have little memory of a series of incidents in which Josh molested five young girls, four of whom were his sisters.


The goal of the hearing was to determine if Josh’s previous crimes should be held against him in court.


On Tuesday, after months of delays, Josh was back in court — with wife Anna by his side — as jury selection began.


If he’s convicted, the former reality star faces up to 20 years in prison.


On social media, some observers expressed shock at the fact that Anna held Josh’s hand as he entered the courthouse this morning.


Of course, for those who are familiar with the extremely patriarchal culture in which Anna was raised, the gesture came as little surprise.


Insiders say Anna has no doubt that Josh is innocent and will be acquitted at trial.


According to sources close to the family, Anna believes Josh was framed by the Biden administration and would not have been arrested if Donald Trump had been re-elected.


Naturally, this level of delusion raises concerns about Anna’s ability to protect her seven children from a man with a long and well-documented history of predatory behavior.


Josh was released on bail shortly after he was arrested on charges of receiving and possessing child pornography back in April.


The bail was granted on the condition that Josh not be permitted to spend time alone with any children as he awaited trial.


As a precautionary measure, Josh was forced to take up residence with the Reber family, friends of his father’s who offered to provide him with a place to stay after his release.


According to a new report from YouTuber Katie Joy, prosecutors were “terrified” that little would be done to enforce the rules and that Josh would be granted regular, unsupervised access to his children.


And in a new post on her Instagram page, Joy claims that this fear turned out to be completely justified.


“Prosecutors were so terrified for the safety of Josh Duggar’s children that they pleaded with the court to not allow him out on bond,” Joy wrote today.


“They even told the judge that Josh & Anna were not cooperating with CPS & had refused to allow forensic interviews & exams of their kids.”


From there, Joy claimed that the reports of Anna essentially abandoning her children in order to spend time with Josh were actually understated.


“While on bond, Anna has abandoned her kids. She stayed every single night with Josh at his guardian’s home,” she wrote.


“The children were left in the care of the Duggars,” Joy continued.


“Josh has been given unlimited access to his kids as long as Anna is there.”


Anna welcomed her seventh child while Josh was awaiting trial, and according to Joy, she exhibits zero concern that she’s putting her children in danger by allowing them to be unsupervised with Josh.


Or,for that matter, with the people who enabled Josh’s behavior.


“How can she protect her kids when she abandons her 1 year old, Maryella to sleep with Josh every night?!” Joy asked her followers.


“The answer is she can’t, she won’t & Josh is more important to her,” she continued.


From there, Joy made a more general statement about the cycle of generational abuse:


“If you cannot protect your child from a sexual predator, you should not be a mother.”


In the days to come, we’re sure to find out a great deal about the Duggar family and the ways in which it has enabled years of abuse.


But sadly, we may never know the full story.


Like every infamous criminal organization, the Duggars are held together by a shared belief in the value of secrecy and silence.


When external forces — in this case, the federal government — intervene, they’re able to shine a brief light on this malfeasance and they may even put a stop to some of it.


But generational silence is a powerful force — and in cases such as the Duggars’ it has the potential to conceal limitless evil.


We’ll have further updates on this developing story as more information becomes available.