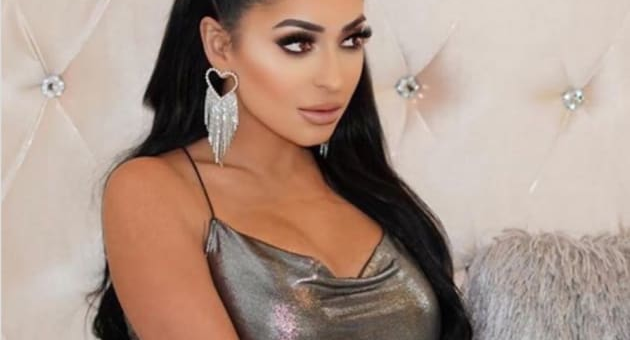 We should have known things would turn out this way.


When Angelina Pivarnick joined the cast of Jersey Shore Family Vacation, fans of the Staten Island Hamster were hopeful that history wouldn’t repeat itself, and everyone would be able to get along.


And they had reason to be optimistic.


After all, this was a kinder, gentler Jersey Shore cast.


These people are full-blown adults now — some of them have kids of their own, and others have been humbled by brushes with the law and similarly brutal twists of fate.


Surely, the new and improved Shore cast would be able to set aside their differences with Angelina and welcome her into their family, right?


Well, the experiment may have worked for a little while … but these days Angeliners is an outcast once more.


As you’re probably aware, it all fell apart at Angelina’s wedding back in November.


That’s when Snooki, Deena, and JWoww delivered a bridesmaid’s speech that had wedding guests booing and the bride running from the room in tears.


When the episode documenting the wedding finally aired in May, some fans began to feel that they’d rushed to judgment, as the ladies’ remarks didn’t seem quite so deplorable in context.


But it was too late.


Snooki had already quit the show amid backlash from fans, and now it looks as though JWoww is planning to follow suit.


Insiders say Pivarnick couldn’t be happier about the personnel shake-up for two reasons:


1. She believes — perhaps rightly — that she’ll now be the star of the show, and


But the latter factor might be a little unfair, as an anonymous Shore producer revealed in a recent Reddit Q&A that the ladies had no choice but to deliver that speech:


“Angelina’s wedding was paid for by the network, production, and sponsors,” the producer explained.


“You can bet your life that she had to relinquish any and all control from a filming and production logistics stand point,” he added.


“[For example,] production told her that Jenni, Deena, and Nicole would need to be in her bridal party and that they would need to make speeches at her wedding reception.”


Snooki corroborated that version of events in a recent interview with The Ashley’s Reality Roundup:


“I literally told producers, ‘I’m not going to do a speech because I’m not comfortable doing one; I don’t think we should be doing one,’” she said.


“We were forced to do something we didn’t want to do.”


When Deena complained that she and the other female Shore cast members were receiving death threats, Angelina demonstrated zero sympathy:


“I’ve been getting death threats since 2009 And I still get them to this day,” she tweeted.


“I can’t control what people write to you or what they write to me. You are always going to have trolls commenting and saying stupid shit. Don’t blame for other people’s actions.”


“They’re blaming you for the fact that THEY embarrassed you on your wedding day but you were respectful and respected deena’s sons baptism,” one fan replied.


“They’re just making excuses for what they did to you, like they always do. And yeah! Angelina has gotten hate FOR YEARS!!”


In all likelihood, it’s some combination of the two.


But Angie’s latest Instagram activity has us thinking it’s mostly the latter.


“Do I look like Kim or Angelina? Hmmmmm,” she captioned the above pic.


It’s not the first time she’s compared herself to Kim Kardashian, and he have to admit, we might have been the ones to plant that idea in her head:


But hey — there’s no denying that Angelina is looking more and more like Kim every day.


Of course, she’s still lacking Kim’s wealth and A-list fame, but we’re sure she’s not too discouraged by that.


In fact, if you ask Angeliners, she’d probably tell you she’s well on her way!

Sanjana Sanghi says that after the trailer of Dil Bechara dropped, she thought Sushant would text