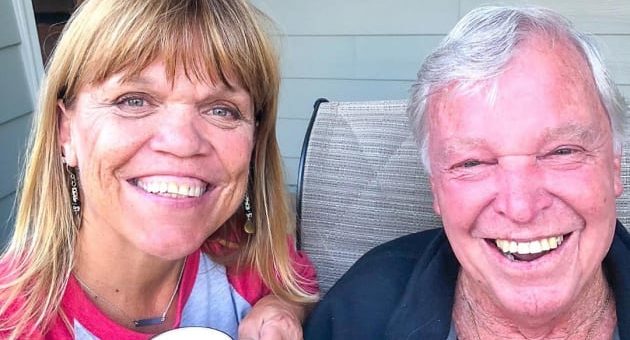 Amy Roloff has provided social media followers with an update about her upcoming wedding to Chris Marek.


It’s unfortunately not a positive one, however.


On her Instagram Story this past Tuesday, the Little People, Big World star revealed that her father may not be in attendance when Amy walks down the aisle on August 28.


No, this isn’t a Meghan-Thomas Markle estrangement type of situation.


Roloff’s father sadly is suffering from some serious medical concerns.


“My Dad. He’s 92. He’s been in the hospital for the last two weeks,” Roloff explained, elaborating a bit further as follows:


“Not sure if he’ll make it to our wedding. I’m glad he’s now getting better/stronger.


“But God knows and so I keep giving it up to him.”


Alhough the mother of four did not indicate exactly what sort health problems her father has endured as of late, she noted that she’s “just happy” she will be able to see him again in her native state of Michigan.


“Love my father,” Amy added alongside a red heart emoji.


Despite this upsetting news, Roloff and Marek are making final preparations for their big day.


On Monday, for example, Amy shared a photo of her and many loved ones at her bridal shower.


“I’m blessed and thankful once again with very good friends, my daughter-in-laws and Lisa and Debi,” the TLC personality wrote as a caption a montage of photos from the gathering.


“Had a good time at the bridal shower Lisa and Debi [gave] to me.”


Yes, this is a cardboard cutout of Amy’s husband-to-be. HA!


Roloff added that “some of the gifts will definitely add a little spice, if you know what I mean, and inspire me in the kitchen.”


Amy and Chris also just completed a wood project for their nuptials.


“Chris is really doing all of it,” she said while sharing photos of the woodwork a few days ago.


Heck, even ex-husband Matt Roloff has been getting into the act — despite not being invited to Amy’s wedding.


Last Wednesday afternoon, the Little People, Big World patriarch uploaded a number of photos on his Instagram account, all of which gave followers a look at ongoing construction on his property.


“Racing at full speed to get the new building finished before the Big day, @amyjroloff and Chris’ wedding day,” Matt wrote as a caption to pictures of a building going up on his farm.


Indeed, Amy was hesitant about it at first… but she and Marek then decided to exchange vows on the land now fully owned her ex.


“This was hard, but the farm has beautiful scenery and we just don’t know what’s going to happen with COVID, so it’s easier to have it there,” Roloff said on an episode of Little People, Big World this summer.


She noted that “other places just kind of eroded away and plan B became plan A.”


Amy sold her shares of Roloff Farms to Matt in 2019 and moved off the property after decades of residing there.


The former couple, who finalized their divorce in 2016 after nearly 30 years of marriage, share twins Jeremy and Zach, 31, daughter Molly, 27, and son Jacob, 24.


Roloff and Marek got engaged just about two years ago and planned to get married in 2020… until a global pandemic changed everything.


“The BIG day is almost here. 28 days I’ll marry my love, my friend, my partner. The one I’ll start and end my day with. Hold hands, kiss and hug,” wrote Amy at the end of July.


“The one I get to have coffee with, talk to and have those conversations that are easy and hard, take rides and travel with, share faith, hopes and dreams with and live life together.