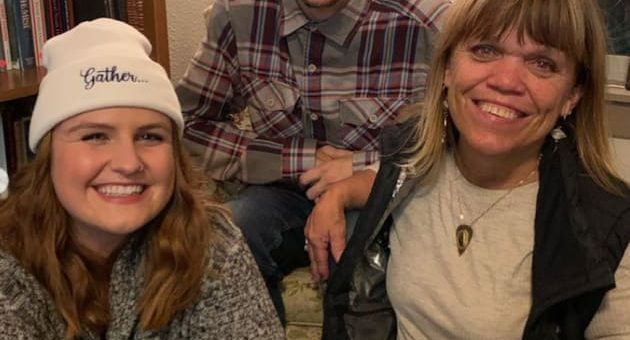 Amy Roloff is once again facing some rather harsh charges.


Not of the legal kind, of course.


Of the ethical variety.


Back in early September, the mother of four shared a photo of herself on Instagram.


She was carrying a reusable bag at the time and she wrote as a caption to this snapshot:


“It’s important that we all reduce our plastic use to help the environment, and reusable tote bags can help!”


“Oregon no longer gives bags away in stores so I always have to bring totes to the store with me to carry all my groceries!’


What was the big deal at the time?


To some, it was the fact that Amy then promoted her “Eat. Love. Gather…” tote bags, saying they were available on her official website


Roloff was criticized by a handful of followers at the time for sort of exploiting the coronavirus because she was, technically, trying to make money off the crisis.


A week before Thanksgiving, you see, Amy hung out with son Jacob and daughter-in-law Isabel and included this message along with it:


This mama had to see how her kids are doing. I’m proud of them both and miss them. I’m glad they’re not that far away though.


And I so appreciate their support too- wearing Amy Roloff’s Little Kitchen beanie hats. These hats will keep you warm as the weather turns cold.


Check out www.amyroloffslittlekitchen.com for these and other great ideas. Love my kids.


That Amy combined time with her loved ones with an opportunity to use them as salespeople.


“Please Amy keep the family posts and the advertising for your products separate,” wrote one follower, adding:


“When I read the post and got to the part about the beanies it turned the whole post into an advertisement. Ruined the whole fuzzy warm feeling.”


To be honest, and to be fair to Amy, almost everything she posts online has some sort of professional slant to it.


She makes money off reality television.


Even if Jacob were NOT wearing an Amy-sponsored hat in these photos, Roloff would still be presenting family photos as a way to appear warm and wholesome — because she wants you to tune into her reality show and make her money.


One of our staff writers attended an Amy Roloff book signing and spoke briefly to the TLC personality.


She is very, very nice and comes across as quite real.


But Amy is almoost always hustling in some way or another, even if it’s not in as blatant a manner as it was with Jacob and Isabel and these hats.


We really don’t wanna be harsh.


We just wanna keep it realistic.


And if you wanna surf around Instagram to get any fuzzy warm feelings, as the user above mentions, then you probably shouldn’t include anyone you know only from television on that list.