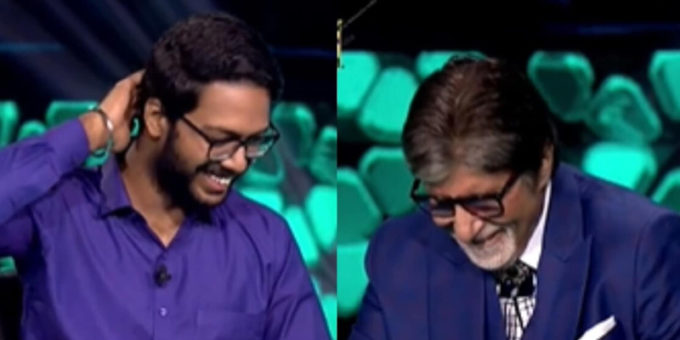 Amitabh Bachchan, who is currently seen as the host of ‘Kaun Banega Crorepati 13’, was left in splits after a contestant mimicked Nana Patekar.

The participated sitting on the hotseat Nana Patekar in such a way that Amitabh Bachchan could not stop himself from laughing.

The participant also improvised Nana’s famous ‘Ek Machhar’ line to describe the journey of a contestant trying to win the jackpot in KBC 13.

In a promo shared by Sony TV on social media, a contestant named Aditya told Amitabh Bachchan that there was a time when he often used to watch movies in theatres. He says that it is not possible for him anymore. Aditya is fond of watching movies. He said that there are some films that Aditya has seen more than 10 times and he also remembers his dialogues.

When Amitabh asked him to present a sample, Aditya performed a funny act mimicking Nana Patekar. He told Big B that if Nana is on the hot seat, what will he do, I present this in front of you. At first, Aditya laughed like Nana Patekar and then just like him in Nana’s style, put his hand behind his head, seeing that Amitabh Bachchan started laughing out loud.