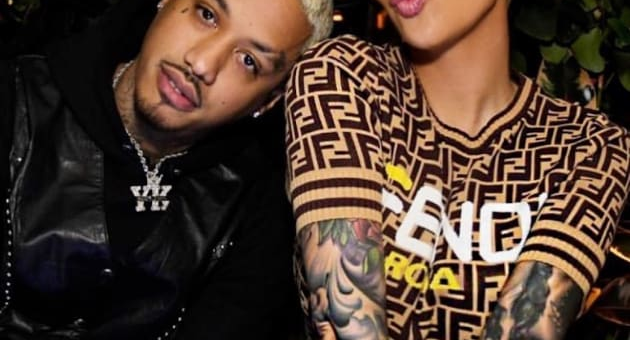 Amber Rose has never hesitated to call out bad men in her life, even when they’re part of her past.


Now she is doing it once again, calling out Alexander “AE” Edwards and accusing him of cheating.


She accuses him of cheating with 12 different people, in fact.


Oddly, some people are accusing her of being a total hypocrite for objecting. WTF?


Amber Rose took to her Instagram Stories this week to call out her partner and his alleged side pieces.


“I’m tired of getting cheated on and being embarrassed behind the scenes,” she began.


“All 12 of y’all bums (the ones that I know of there’s probably more) can have him,” Amber declared.


“Y’all very much knew he was in a relationship with a baby,” Amber accused.


Explaining how she can be so certain, Amber wrote: “I saw all the texts and DMs.”


“But,” she acknowledged, “y’all don’t owe me any loyalty so it’s whatever.”


That is a nuanced and very mature take, one that will be relevant later.


Amber did not name the alleged side pieces.


She affirmed that she is “not in the business of ruining lives.”


However, Amber strongly implied that her relationship is over, and that it ended because of the cheating.


“I can’t be the only one fighting for my family anymore,” Amber expressed.


“I’ve been so loyal and transparent,” she noted.


“But,” Amber added with regret, “I haven’t gotten the same energy in return.”


“As for him… The lack of loyalty and the disrespect is ridiculous and I’m done,” Amber announced.


We of course want to highlight that Amber did not actually name the alleged cheater in this story.


However, her partner of three years obviously came to everyone’s mind.


She wrote that her mother “can get the f–k out of my life, too.”


And that was not the end.


“I’m tired of being mentally and emotionally abused by people that I love,” Amber lamented.


“I’ve been suffering in silence for a long time,” she wrote, “and I can’t take it anymore.”


“I’ve been a shell of who I used to be,” Amber characterized.


“But,” she declared, “I refuse to let anyone damage me anymore.”


Amber added that this applies whether someone is “Family or not.”


Because she is the founder of the SlutWalk, a sex positive movement to end slut-shaming and erase sexual stigma.


Some very confused people on Twitter suggested that, since Amber supports sexual liberation, she should be fine with what happened.


That does not make one iota of sense … because she has no problem with sex itself.


Amber isn’t slut-shaming her (now ex) partner for boning a dozen side pieces. Her issue is the cheating.


Sex positivity doesn’t mean that you can cheat on your partner. Even open relationships require consent for everyone involved.


And notably, Amber offered that very nuance reproach of the side pieces.


She’s not accusing them of being “homewreckers” because, though they knew of her, they were not the cheaters (presumably) — her ex was.

Pictures: Alia Bhatt snapped out and about in the city

Delhi Government to start Sero-surveillance every month to combat COVID. Here is what it means
2020-07-22