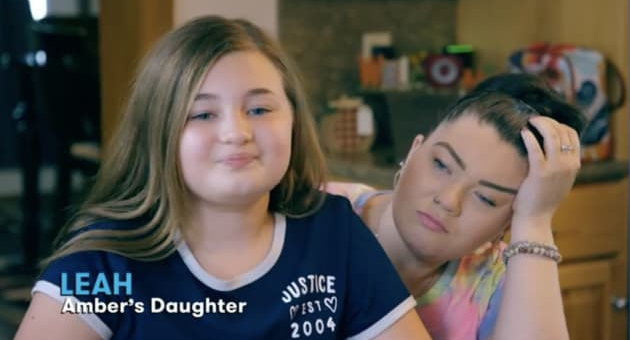 Amber Portwood doesn’t have the greatest track record when it comes to telling the truth, so it can be difficult to tell what’s going on with her.


Lately, she’s been trying to create the impression that her life is on the upswing.


But not everyone is buying it.


Obviously, amber would prefer that we all focus on the progress she’s made in recent months.


And to be fair, she has started being nice to Gary and Kristina Shirley, which we guess is an improvement.


But really, that’s the very least we should expect of her.


After all, those two have been raising Amber’s 12-year-old daughter, Leah, for most of the girl’s life.


And for every Good Thing in Amber’s life these days, there’s an equal and opposite Bad Thing.


For example, just last week, Andrew Glennon accused Amber of abusing their son, and she has yet to respond to the allegations.


Maybe she only has the energy to get along with one baby daddy at a time.


And frankly, even the Gary situation isn’t going as well as she would like us to believe.


A trailer for the upcoming season of Teen Mom OG was released on Thursday, and judging from the Amber-related clips, her life is as messy as ever.


Amber got accepted to Purdue University.


She’s quite excited about the news in the trailer, even holding her phone to the camera so that we can all see her acceptance letter.


That’s sort of unnecessary, as it’s not like we would have thought that Amber was lying,


Sure, she has a long history of BS, but this isn’t like when Farrah Abraham claimed she was going to Harvard.


Anyway, despite her bright educational future, it seems that Amber is still having a tough time in just about every other area of her life.


She’s trying to make amends with her daughter for being a horrifically crappy mother for most of the girl’s life.


Unfortunately for Amber, a simple apology can’t make up for years of shoddy parenting.


We see her in the trailer tearfully begging forgiveness on a FaceTime call (seems like the sort of thing that should’ve been done in person, but maybe Covid complicated things), but unfortunately for Amber, young Leah seems uninterested.


Harsh but fair, considering how much Amber has done to drive a wedge between herself and her daughter.


Will Leah eventually decide to give her mom another chance?


We don’t know, but either way, we hope she continues to make Amber work for it!


Elsewhere in the trailer we see Maci struggling with PTSD after witnessing a shooting, and Tyler and Catelynn learning that they’re having another girl at the world’s saddest gender reveal party.


(It was only attended by the two of them, and they’re both visibly saddened by the news.)


But hey, Catelynn and Tyler welcomed their rainbow baby last week, and they appear to be overjoyed by the girl’s arrival.


So maybe there really are more Good Things than Bad Things in the world of Teen Mom OG.


Unless you’re Amber Portwood, of course — that woman just can’t stop inviting negativity into her life.

US Open: Naomi Osaka Knocked Out By Leylah Annie Fernandes In 3rd Round

Ekta Kapoor expresses her grief over Sidharth Shukla’s passing away

Halle Bailey Cast as The Little Mermaid, Racists Flip Out on Twitter
2019-07-05