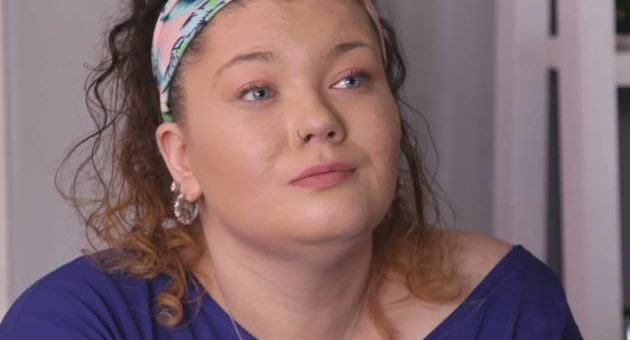 Amber Portwood’s new book is filled with a lot of details about the Teen Mom star’s life.


Not everything gets filmed by MTV. A lot of Are You Crazy, Too? has hair-raising stories from Amber’s past.


Viewers may think that she practically lives on her couch, but Amber has made plenty of time for her bedroom, too.


In her memoir, she opens up about her sexual history, referring to having had more than 40 sexual partners.


Amber didn’t just cover the simple stats of how many men and women she has slept with over the years.


She also spoke about how much sex she likes, when she wants it, and what really drives her wild.


Fans will of course remember when Amber came out as bisexual last year. Obviously, her book discusses the women who have shared her bed.


There is some ambiguity to that sentence, but strictly speaking, she’s saying that she has slept with at least 41 men and at least 2 women.


Either of those numbers could potentially be considerably higher, but that doesn’t necessarily mean that they are.


Truth be told, many would be surprised to know how far above average that is.


Did you know that the average person has only had 7 or 8 sexual partners in their lifetime?


Before you ask, yes, that statistic includes Millennials.


We can of course remember that, for every sexual superstar whose body count is in the triple digits, there are people with zero to two partners bringing down the average.


That is okay! Sex is a personal decision, not a grade on a test or a competition.


Amber also shared that, frankly, not everyone can keep up with her long enough to stick around.


“When I am in a committed relationship,” she divulged, “I like to have sex four or five times a day.”


Before some wonder if that’s a realistic ask, we should remember that there are many types of sex, and not all of them have to involve a penis or Olympian stamina.


“I am certain, of course, that this is part of a mental disorder,” Amber said, likely referring to her bipolar disorder diagnosis.


One of the classic symptoms of a manic episode is a significantly increased sex drive.


“But sometimes I think sex is just a healthy part of life,” she said accurately.


“And my love of sex is an attribute, not something to be cured,” Amber expressed.


She is once again absolutely right.


Someone not wanting sex at all is not a disease. Neither is wanting it all of the time. Sexual desire, like so many things, is on a spectrum.


Amber noted something that countless people in the mentally ill community have observed: being medicated has drawbacks.


“Low sex drive is a side effect of antidepressants,” she noted.


“I still really enjoy sex, of course,” Amber affirmed, “but it takes more work now to get me going.”


“I am pretty sure this side effect of my medication is the Universe’s way of slowing me down,” Amber joked in her book.


We would like to think that the universe does not, in any sense, have a vested interest in killing anyone’s sex drive.


There are a lot of problems in the world. Horniness is simply not one of them.


Amber noted that sex isn’t just fun — it has actually improved her life dramatically, in the long term.


“My love of sex landed me on a show about teen pregnancy that pays my bills to this day,” she pointed out.


“So,” Amber reasoned, “it’s hard to think of my desire for a lot of sex is a dirty secret to be kept locked up and not discussed.”


To be clear, we think (we hope) that this is an endorsement of healthy human sexual expression.


Not a recommendation that others become parents as teenagers in order to follow in their footsteps.


In case there was any doubt, becoming a parent when you are in high school is not a healthy expression of sexuality.


“But clearly I needed to learn — and I am still learning,” Amber continued.


She is learning “that it is possible to have too much of a good thing.”


Amber added that this is true of “(even a great thing like sex).”


Amber touched on (pun not intended) Dimitri Garcia, whom she “dated” when he would make trips from Belgium to see her.


According to her, she rocked his whole world in terms of her sexual desires and creativity.


“I like to call my Belgian lover ‘Pretty Dick’ for obvious reasons,” she wrote. Well, good for him.


“He calls me ‘Baby Love.’ I think I introduced him to a whole new world, sexually speaking…” Amber noted.


In addition to some extremely explicit details, Amber also shared that she introduced Dimitri to love biting … something that most people discover on their own.


We hope that Amber’s honest discussion of her sexual history will inspire others to love themselves a bit more. Sexual stigma is brainrot.

India To Bid To Host This Year’s Chess Olympiad