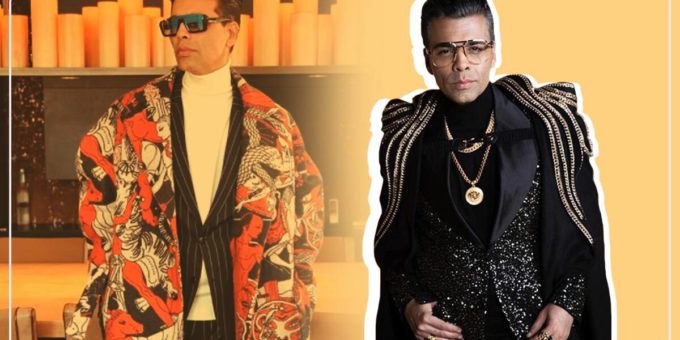 Karan Johar wears many hats. He is a filmmaker, producer, talk show host, and reality TV judge. But what remains common across all these professional engagements is his fashion sense. It would not be wrong to say that along with Ranveer Singh, he can be credited to have changed the face of men’s wear. Be it sequin tuxedos or whacky prints, he stops at nothing.

In an interview with indianexpress.com, celebrity stylist Nikita Jaisinghani had shared that Karan is “the most experimental”, always “ready to try new and different styles and silhouettes.” His style, the stylist whose clientele includes Abhishek Bachchan, Aditya Roy Kapoor, Alaya F defined as “bold”.

As the filmmaker celebrates his birthday on May 25, we bring to you some of his most quirky and chic looks.

Karan had nailed this red sequined tuxedo by Dolce and Gabbana styled with black pants. The look was completed with a suede bow tie and black shirt.

He looked equally striking in this Dolce and Gabbana pantsuit featuring dancing girls’ print. The look gave out 90s vibe and was teamed with a quirky pair of statement sunglasses.

Karan was also seen in a Dolce and Gabbana bomber jacket that featured a panther portrait on it. This was teamed with casual black jeans and a tee.

For the Vogue Women of The Year awards in 2019, the director had opted for an Issey Miyake ensemble. Styled by Nikita Jaisinghani, the look was sobered down in comparison to his other outings. But what stood out were those Rick Owen shoes. Posing in those killer heels, he had our undivided attention.

He channeled his inner style diva in this Gaurav Gupta sequin tuxedo. We dig the drama in the ensemble, especially the sculpted cape. The look was accessorised heavily with gold chains and several rings.

He was seen in another outfit by the same designer, which was by no means any less stylish. The black tuxedo featured the designer’s staple sculpted details on the shoulders.

Trust Karan to go big. He was seen in a white high neck t-shirt paired with a striped tuxedo and a large printed jacket. The look was pulled together with oversized glasses.

We hope he continues to remain this unabashed!

Did you know these English words were originally Japanese?
2020-02-21

Dear Turner: A love letter from a father to his son about the gift of Down syndrome
2019-03-23