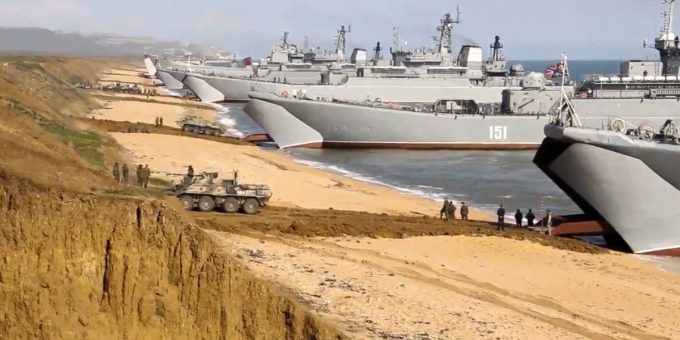 Should Russian President Vladimir Putin decide to attack Ukraine, he will have about 220,000 troops at his disposal, including about 120,000 already deployed near Ukraine’s borders, Ukraine’s Ministry of Defense told Military Times Thursday morning.

But whether he will attack still remains unknown, according to the MoD, which charts two potential courses of action Putin could take — either all-out war or a “creeping occupation” of Ukraine.

While Russia would be prepared to launch an attack by February at the latest, according to the MoD, Ukraine officials are still uncertain if Putin will give the go-ahead.

“According to our data V. Putin has not yet made the decision,” according to the MoD. “It will depend upon many factors.”

Before making the decision to attack, Putin will factor in the economic and political situation in Ukraine, support for Ukraine from the international community, “strict reaction (in the form of so-called hellish sanctions, military assistance, etc.) of the world leading countries on the Kremlin’s aggressive policy towards Ukraine,” and the situation in Russia itself, according to the MoD.

President Joe Biden has spoken to both Putin and Ukrainian President Volodymyr Zelensky in an effort to calm the situation. He promised both that Russia would face “severe consequences” if Russian military forces advance into Ukraine, but he also said that he would not deploy U.S. combat forces to the region to push back any such assault. Other western leaders have made similar statements. New German Foreign Minister Annalena Baerbock said Russia would face “massive consequences” if it attacked, according to Reuters.

In addition to the 120,000 Russian troops currently arrayed around Ukraine’s borders, Russia would deploy troops from its Western and Southern military districts, as well as airborne units should it decide to attack, according to the assessment.

“The full strength of all Russian troops … which may be involved into the large scale invasion against our country makes up around 220,000 servicemen,” according to the MoD.

The Russian embassy did not immediately respond to a request for comment. However, Putin has denied plans of launching an invasion and reversed the conversation by prodding Western leaders to provide legally binding guarantees precluding NATO’s expansion to Ukraine and the deployment of the alliance’s weapons there, calling such actions a “red line” for Moscow, according to The Associated Press.

“The Kremlin said Thursday that Russia submitted draft documents outlining security arrangements it wants to negotiate with the United States and its NATO allies amid spiraling tensions over Ukraine,” according to AP.

Kremlin spokesman Dmitry Peskov said a senior Russian envoy stood ready to immediately depart for talks in a neutral country on the proposal, according to AP.

While Ukrainian morale remains high, the MoD says it is under no illusions how bad things could get.

“There is no doubt about high morale and patriotic spirit of our citizens to defend our sovereignty and territorial integrity,” the MoD said. “At the same time, Russia has one of the biggest armies in the world by strength and armaments. If the decision to enlarge the scale of armed aggression against Ukraine is made, Russia will use all available arsenal of modern armament.”

That arsenal includes operational-tactical and army aviation, high-accuracy weapons belonging to its air, naval and ground components and electronic warfare weapons, according to the MoD. Ships from Russia’s Black Sea Fleet and the Caspian Flotilla will activate in the Black Sea and in the Sea of Azov.

While it is unknown what Putin will do, Ukraine’s MoD told Military Times there are a couple of courses of action he could take.

“We expect that Russian leadership has enough sense to avoid war,” the MoD said. “In its turn the most real scenario of the situation development is creeping occupation of Ukraine.:”

Similar to how Russia was able to annex Crimea and invade eastern Ukraine with the help of local separatists, an ongoing fight that has claimed more than 14,000 lives since 2014, Ukraine’s MoD says Russia could expand on that effort, using “special services/Russian agents of influence.”

Thus, Russia would “create favorable conditions for combat actions intensification” in eastern Ukraine, according to the MoD.

“Provocations made by Russia on the temporary occupied territories of Donetsk and Luhansk oblasts with numerous victims of local population … (locals with Russian passports) will be excuse for the renewal of hostilities. It will be used by the Kremlin for protection Russian citizens. Under favorable conditions Russia will continue further occupation of Ukraine.”

To date, the U.S. has committed more than $2.5 billion in security assistance to Ukraine since 2014, according to the Pentagon. That support “includes but is not limited to the provision of air surveillance radars, counter-artillery radars, counter-unmanned aerial systems, secure communications, military medical gear, armed patrol boats, and Javelin anti-tank systems.”

Given the scope of Russia’s arsenal, Ukraine is seeking more.

The Ukraine military is working to rapidly field the weapons the U.S. is providing, like Javelin man-portable anti-tank missiles.

“We will solve this task in the shortest period of time with the assistance of Western instructors,” according to the MoD. “We’ve already got this experience in the Armed Forces of Ukraine.”

Should the Russians invade and overwhelm Ukraine’s military, officials there are planning for a potential insurgency to fight back.

“In case of [Russian Federation] attempts to enlarge scales of armed aggression against Ukraine the answer is yes,” the MoD answered in response to a question of whether it would distribute arms to its citizens. “Nowadays measures on formation troops of territorial defense are being conducted.”

Antibodies Aren’t The Only Defence Against Omicron. Here’s Why

Afghanistan: US and Taliban hold first face-to-face talks since withdrawal
2021-10-09