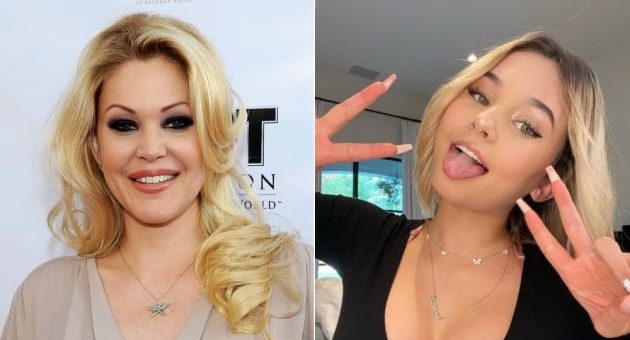 One of the most pleasantly surprising celebrity news stories of 2021 has been the relationship between Kourtney Kardashian and Travis Barker.


At first, the pairing seemed too strange to be true.


Here was Kourtney — the ultra-glam reality star and fashionista — partnering up with Travis, a heavily-tattooed drummer best known for his work with an irreverent punk band.


But while the nay-sayers may have been filled with doubt, Kourt and Trav have proven them all wrong with a relationship that seems to get more serious by the day.


It remains unclear if there’s any truth to the rumors that Kourtney and Travis are planning a wedding.


But there’s no doubt that these two are head-over-heels for each other.


Of course, the relationship is not without its obstacles.


Though they’ve been divorced for 13 years Travis and Shanna have two kids together, which means they both continue to play large roles in each other’s lives.


It seems they’ve been amicably co-parenting for most of that time, but the relationship has taken a turn for the worse in recent months.


The trouble began when Shanna complained about Travis and Kourtney’s social media PDA.


“I’m very much over my ex. It’s been a long time. However, do I think some of the PDA that he’s doing with her is weird? [Yes],” Moakler said in a recent interview.


“As long as she’s good to my children, that’s truly all I really care about,” she later added of the Keeping Up with the Kardashians star. “My kids seem to really like her and her family, so that’s key.”


Now to be fair, these two are frequently all over each other on Instagram, and we can see how that might be a little weird for their exes.


And in recent weeks, both teens have been highly critical of Shanna, with Alabama leading the way:


“My mom has never completely been in my life, can you guys stop painting her out to be an amazing mom,” Bama wrote on Instagram this week.


“Did your mom ask to see you on Mother’s Day cause mine didn’t? I’m done keeping a secret, reality shows,” she continued.


From there, Alabama criticized her mother’s relationship with longtime boyfriend Matthew Rondeau.


“Everybody thinks my mother is amazing, Matthew is nothing but awful to her not only that but he cheats on her,” she wrote.


Shanna was quick to clap back, defending Matthew, and criticizing Travis for creating tension within the family.


“Matthew has been my rock, he truly has changed and has been amazing,” Moakler wrote on Instagram.


“Family is all that matters but I can’t compete with kids whose father doesn’t encourage relationships with their own mother.


Landon was initially silent on the matter, but on Tuesday, he bashed a commenter who encouraged the kids to go easy on their mom.


“Actually, if you weren’t such a dumbass, you would realize our mom has never been in our lives and isn’t in our lives like our dad is,” Landon wrote.


Shanna opened up further in a recent interview in which she claimed that her kids are drawn to the lavish lifestyle that their father is able to provide for them.


“I refuse to involve them in a vindictive parenting competition where feelings are bound to get hurt. Encouraging relationships with both parents is a duty on both mother and father,” she said.


“I know one day my children will see through the fame and money machine they have been thrust into and realize their mother loves and will always be there for them.”


As for the tension between Shanna and Kourtney, Moakler maintains that she and Kardashian are fine — but she admits that she’s had some trouble with some of Kourt’s most diehard fans.


“If anything, my only issue with this whole sort of craziness that’s been going on is her fan base … it’s really almost to the point of being bullied,” she said.


“I look at social media as a place to have fun. It should be positive.”


Well, if that’s the only issue, maybe Shanna should bring it up with Kourtney.


After all, if anyone knows what it’s like to be bullied on social media, it’s the Kardashians!

Full video: Braverman is confronted for her language against migrants
2023-01-18

TI is the proof of ineffective system of Pakistan: Shehbaz Sharif
2022-01-26