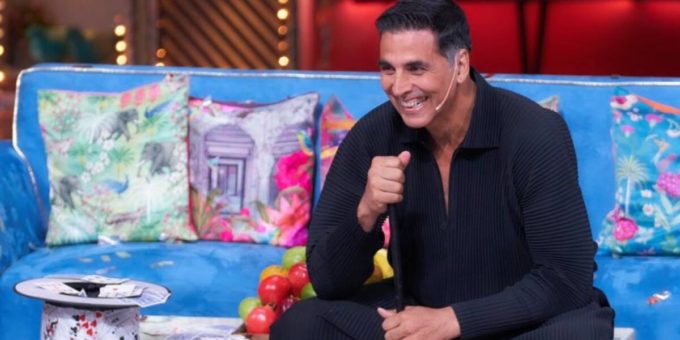 Actor Akshay Kumar will promote his upcoming film Atrangi Re on The Kapil Sharma Show this weekend. In one of the promos for the episode, the actor commented on the on-going feud between comedian Krushna Abhishek and his uncle, actor Govinda. The promo, shared by Krushna, showed Akshay Kumar saying that while Krushna fakes everything on the show and mimics big personalities, he has picked up a serious fight with his uncle. The comment left Krushna, as well Akshay’s Atangi Re co-star Sara Ali Khan, in splits.

Sharing the video on his Instagram account, Krushna wrote, “Hamesha mazzaa aata jai jab Akshay sir hum sabki class Lagate hain. Mazaa bhi aata hai darr bhi lagta hain. Akshay sir love u we always wait for u to come (It is always fun when Akshay Kumar pulls everyone’s leg. It is fun and scary, too. We love you and we always wait for you to come).” Akshay and Krushna have shared screen space before. The two featured in a film titled Entertainment.

Krushna and Govinda‘s dispute remains unresolved. In a conversation with Rani Mukerji and Saif Ali Khan, who were on the show to promote their film Bunty Aur Babli 2, Krushna mentioned that he is no longer a part of his family. “Mereko film industry ka sab pata rehta hai, meri poori family film industry mein hai. Woh alag baat hai aaj kal main family mein nahi hoon (I know everything about the film industry, my whole family is a part of it. It is a different story that I am not a part of my family nowadays),” he said. The relationship between Govinda and Krushna Abhishek has been strained for a while now. Earlier this year, when Govinda appeared on The Kapil Sharma Show, Krushna Abhishek chose to give it a miss, which further fueled the feud.

Govinda’s wife Sunita Ahuja and Krushna’s wife Kashmera Shah have also commented about each other on public forums.

The initial rift between Govinda and Krushna’s families began after the actor appeared on Kapil Sharma’s show in 2016, during which time Krushna had his own show on a rival channel. Govinda did not appear on Krushna’s show, which seemed to hurt his feelings, and Krushna made a joke about it on his show. The joke didn’t go down too well with Govinda.

Ranveer Singh attends his manager’s wedding in Goa amid 83 promotions; twins with the groom : Bollywood News