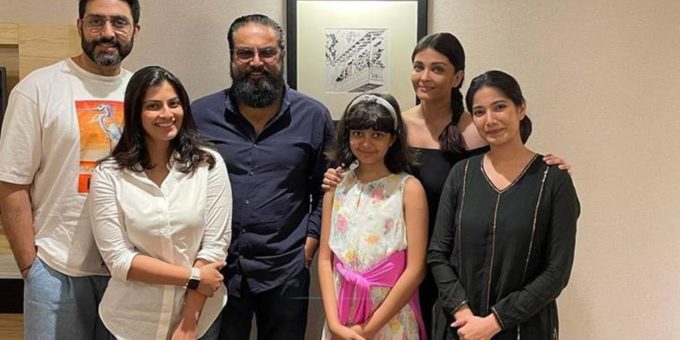 Aishwarya Rai spent some quality time with her Ponniyin Selvan co-star Sarathkumar on Saturday. The actor was accompanied by her husband Abhishek Bachchan and daughter Aaradhya. On Sunday, Sarathkumar’s daughter Varalaxmi Sarathkumar took to Instagram to share her fangirl moment. She expressed how she was “overwhelmed” with Aishwarya, Abhishek and Aaradhya’s humility and love.

“Met 3 of the warmest and most humble people last night.. none other than the gorgeous @aishwaryaraibachchan_arb the handsome hunk @bachchan and their sweetest daughter #aaradhyabachchan,” Varalaxmi wrote.

She added that despite their lineage “their humility and warmth was so amazing, I was just overwhelmed with their love!”

“It was so sweet of you to meet us and spend time with us.. may god shower all his blessings on your family!” she concluded her note, thanking her father “for making this happen.”

Sarathkumar and Aishwarya will be seen in Mani Ratnam’s magnum opus film Ponniyin Selvan.The production of the period fantasy drama began after the Tamil Nadu government relaxed the lockdown restrictions, paving the way for the resumption of the film shootings.

Ponniyin Selvan filming is going on at a brisk pace at a set in Puducherry. Before the second wave of the coronavirus interrupted the production, the filmmakers had shot about 75 per cent of the film. The rest of the shoot will be completed in about 50 days. It is said Mani Ratnam has planned to wrap up the shoot by the end of August.

Ponniyin Selvan marks Aishwarya’s fourth collaboration with Mani Ratnam. The actor-director duo has worked in Iruvar, Guru and Raavanan in the past. All of their previous films have been milestones in cinema history.

Aishwarya shared the poster of the film on her Instagram account and wrote, “The Golden Era comes to Life.” Besides Aishwarya Rai, the film stars Vikram, Trisha, Karthi, Jayam Ravi, Lal, Sarath Kumar, Jayaram, Vikram Prabhu, Prabhu, Ashwin Kakumanu, Kishore and Aishwarya Lekshmi among others. Sarathkumar is said to be playing a supporting role.

Nancy Mace Called Herself a ‘New Voice’ for the G.O.P. Then She Pivoted.

Boppy baby loungers recalled in U.S. and Canada due to suffocation hazard
2021-09-23

PDM’s Tuesday meeting to make it clear where parties stand on resignations: Maryam
2021-03-15