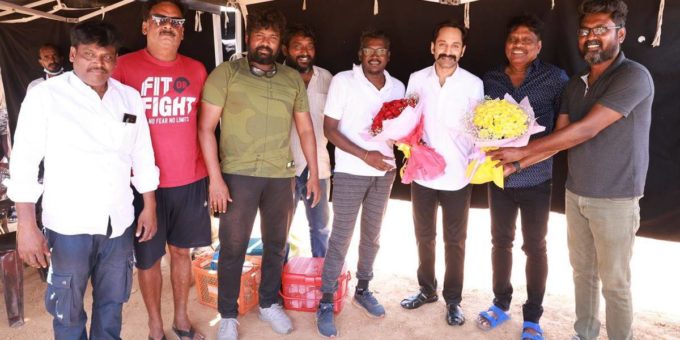 Actor Fahadh Faasil has joined the sets of director Mari Selvaraj’s upcoming movie Maamannan. The film’s editor Selva RK shared a photo of Fahadh being welcomed to the sets by the cast and crew.

If reports are to be believed, Fahadh is playing the villain in Maamannan. The film stars Udhayanidhi Stalin, Keerthy Suresh and Vadivelu in the lead roles. The movie’s music will be composed by Oscar-winning music director AR Rahman.

Mari Selvaraj’s last movie was Karnan, starring Dhanush in the lead role. The movie, about the human rights violations committed in the name of caste, received an overwhelming response at the box office last year. Despite Covid-19 restrictions and cap on sitting capacity in theatres, the movie emerged as a hit at the box office.

Meanwhile, Fahadh Faasil is now waiting for the release of Vikram. Written and directed by Lokesh Kanagaraj, the film stars Kamal Haasan in the titular role. Fahadh has played one of the leads along with Vijay Sethupathi. Suriya will make a cameo appearance in the movie.

Vikram is due in cinemas on June 3.

Fahadh Faasil also has Pushpa: The Rule in the pipeline. Fahadh had appeared in the third act in Pushpa: The Rise, setting the stage for an epic clash in the sequel. Director Sukumar is now in the writing process and the sequel will go into production soon.

Golden Child’s TAG to go on hiatus due to health concerns; rest of the members to proceed with their schedules : Bollywood News