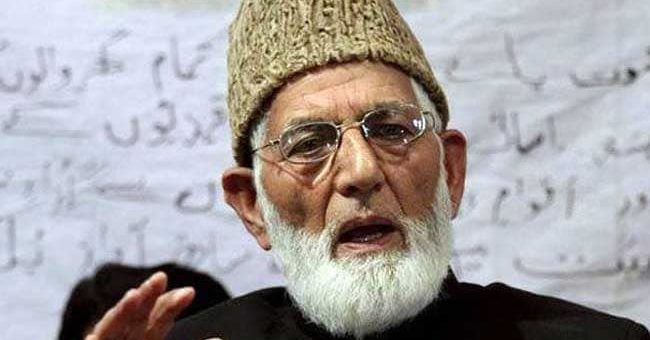 Syed Ali Shah Geelani was buried amid much drama on Thursday, hours after his death.

A series of videos showing the last rites of separatist leader Syed Ali Shah Geelani has been uploaded on social media by the Jammu and Kashmir police. The 92-year-old was given a quite burial on Thursday.

The videos were released following rumours that he was buried without the mandatory ablution and shrouding after his body was forcibly taken away by the police from his family. Mr Geelani was buried before dawn and his family couldn’t perform the last rites.

Visuals from the graveyard during burial of SAS Geelani. pic.twitter.com/ndvcHx5xtG

One of the videos show a group of people cleansing the body and shrouding it. This is followed by funeral prayers and lowering of the body into the grave at a Hyderpora graveyard, a few hundred metres from the late leader’s residence.

The police, however, defended the move saying the family had at first agreed to a night burial, but later changed its mind, forcing the police’s hand.

After death of SAS Geelani, IGP Kashmir Shri Vijay Kumar along with SP & ASP met both of his sons at their residence at 11pm, condoled them & requested for burial in the night for larger interest of general public due to potential major L&O situations. Both agreed and asked (1/4)

“However, three hours later, probably under the pressure from Pakistan and miscreants, they behaved differently and started resorting to anti-national activities, including wrapping the body in a Pakistani flag, making loud sloganeering in favour of Pakistan, and instigating neighbours to come out,” the Kashmir Zone Police tweeted today.

On Sunday, the police filed a case under the anti-terror Unlawful Activities Prevention Act against some of Mr Geelani’s relatives for wrapping his body in a Pakistan flag.

“After persuasion, the relatives brought the body to the graveyard and performed last rites with due respect members of Intizamia Committee and local Imam. The refusal of both his sons to come to graveyard indicated their loyalty to the Pakistani agenda rather than their love and respect for their departed father,” the police tweeted.

The family, on its part, alleged that the police had broken down doors, mistreated its members, and forcibly taken away Mr Geelani body. A series of videos showing the police action has gone viral on social media and messaging platforms.

While some questioned the rationale of the police releasing videos of their version of the incidents four days later, others criticised them for filming the rites in the first place.

“From the videos I saw, and statements made by Geelani’s family, it’s unfortunate the body was maltreated and desecrated,” said Ms Mufti.

“It’s sad that a dead man was not treated with dignity. We cannot do revenge politics on a dead man’s body,” the PDP chief said. Even the last wish of a convict about to be hanged is respected, she said.

The Mirwaiz expressed sadness over the treatment allegedly meted out to Mr Geelani’s family.

“It’s painful and appalling. It is so tragically inhuman when a family is denied the basic right of burial of their loved one and one can only imagine what the family must have gone through,” said the Chairman of the Hurriyat Conference.

For the past four days, an uneasy calm has prevailed. Restrictions have even been lifted from most parts of Kashmir. The police said, however, that mobile internet will remain suspended in Srinagar till tomorrow.

Hrithik Roshan wishes father Rakesh Roshan on birthday: ‘Wish I grow to be as strong and young as you’

Akshay Kumar rushes back to Mumbai as his mother gets admitted to ICU : Bollywood News