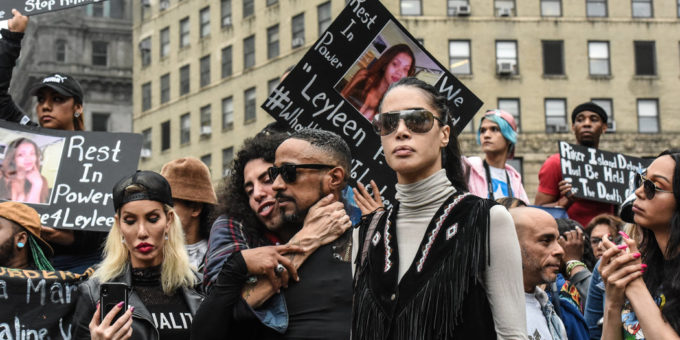 In April, Layleen Polanco, a transgender woman, was arrested on misdemeanor assault charges and sent to the Rikers Island jail complex because she could not afford to pay a $500 bail. Nearly two months later, she was found dead in her cell.

The circumstances surrounding Ms. Polanco’s death on Friday, which have not yet been fully explained, quickly garnered national attention, sparking outcry from both transgender rights and criminal justice activists.

Adding to their anger was what many saw as hypocrisy on the part of New York City officials. Last week the police commissioner issued a long-awaited apology for officers’ actions during the seminal 1969 uprising at the Stonewall bar that was a major turning point in the modern gay rights movement.

And in May, Mayor Bill de Blasio vowed to protect transgender residents.

Activists argued that Ms. Polanco’s death typified the exact pattern of discrimination against L.G.B.T. people that officials had sworn to end.

At the same time, the monthlong WorldPride event, a buoyant global celebration of lesbian, gay, bisexual and transgender identity that is being hosted by New York City this year, has begun its festivities.

Politicians — including the City Council speaker, Corey Johnson, and Representative Alexandria Ocasio-Cortez — celebrities and L.G.B.T. leaders said Ms. Polanco’s death highlighted how the criminal justice system continually victimizes transgender women, particularly those of color, like Ms. Polanco, who was Latinx. (Latinx is a gender-neutral alternative to Latino or Latina.)

Ms. Polanco, 27, was found unresponsive in her cell on Friday afternoon and was pronounced dead after attempts to revive her failed, officials with the city’s Department of Correction said.

As of Tuesday, the cause of her death had not been determined. Officials said they were conducting an investigation and had found no evidence thus far of violence or foul play.

“Layleen’s family and all New Yorkers deserve answers, and we’re working quickly to determine the cause of her tragic death,” said Raul A. Contreras, a spokesman for Mayor Bill de Blasio.

Friends and family have said that Ms. Polanco had a seizure disorder, which they said jail personnel were aware of. It was unclear whether the disorder played any role in her death.

Department of Correction officials referred questions about medical care to the correctional health care system, which said it could not comment, citing patient privacy laws.

On Tuesday, several members of the city’s Board of Corrections, which oversees the city’s jails, expressed their commitment to investigate Ms. Polanco’s death and the circumstances that led to it.

On Monday night, hundreds of people gathered under gray skies at a rally in Lower Manhattan to demand answers and justice in Ms. Polanco’s death.

“Black and brown trans people have been in a war since we were born, in a world that continuously tells us we shouldn’t exist,” Raquel Willis, the executive editor of Out magazine, said at the rally, which was organized by the New York City Anti-Violence Project.

Ms. Polanco was a member of one of the most storied groups in New York City’s drag ball scene, the House of Xtravaganza. Indya Moore, a fellow Xtravaganza and a transgender and nonbinary actor in the FX series “Pose,” was at the rally on Monday and said Ms. Polanco’s death was a reminder of the challenges faced by transgender women.

“Cis, hetero people are deciding whether or not we deserve human rights, and that must end,” Ms. Moore said, referring to straight people whose gender identities matched the sex they were assigned at birth. “We cannot lean on the understanding or empathy of cis, hetero people.”

Speakers at the rally expressed their grief, but also vented their frustration at what they saw as the city’s lack of transparency and their anger at the criminal justice system.

“She went there because of a fight,” said a friend, Maleah Christina Vengerovsky. “And her punishment was a death sentence.”

Alexie Sotomayor of Brooklyn, another friend at the rally who said she was with Ms. Polanco inside Rikers shortly before her death, said: “I’ve been in jail many many, many, times and I’ve seen people pass away in front of my eyes,” Ms. Sotomayor said, “and the city doesn’t do anything if you’re gay. They don’t do anything to protect us.”

Ms. Polanco was sent to Rikers Island in April after being arrested on misdemeanor assault and theft charges, according to the Manhattan district attorney’s office.

She was taken into custody after a taxi driver said she bit him on the right cheek after she refused to pay a $31.30 fare, according to a criminal complaint.

At her arraignment, a judge set her bail at $500, citing missed court appearances in connection with an earlier arrest.

At Rikers, Ms. Polanco was housed in a specialized unit for transgender women inside the women’s jail, correction officials said.

A week before her death, she was moved to a restrictive housing unit as punishment for her role in a fight, officials said. Inmates in restrictive housing are housed separately and receive up to seven hours a day outside their cell, about half of that afforded to the general jail population.

Several former Rikers inmates at Monday night’s rally said the program was equivalent to solitary confinement, a characterization the Department of Correction disputed.

Gillian Branstetter, a spokeswoman for the National Center for Transgender Equality said that isolation and solitary confinement were among the ways that transgender people were victimized in prison.

“There are few people more vulnerable in society today than a transgender person in an American prison,” Ms. Branstetter said.

On Monday night, the comments from speakers were mixed with chants by the crowd to shut Rikers Island down, an action Mr. de Blasio has also called for.

Ms. Polanco’s friends and family described her as a caring mentor to young transgender women who was adored by two families: the one she was born into and the transgender and gender nonconforming one that flocked around her.

“My sister was well-loved,” Melania Brown, Ms. Polanco’s biological sister, said, while her mother and brother looked on.

Overcome with emotion, Ms. Brown thanked Ms. Polanco’s transgender family, saying they stood alongside Ms. Polanco and gave her support when her blood relatives had struggled to come to terms with her gender identity.

“They were there to understand her,” Ms. Brown said. “We appreciate all you guys.”

Annu Kapoor cheated of Rs. 4.36 lakh by an online fraudster pretending to be a bank employee : Bollywood News
2022-10-01