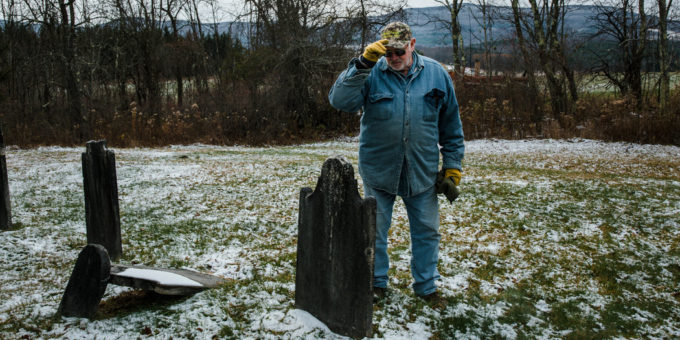 “Sow got out of her pen, had to chase her down,” said Farmer Frank — Frank Hull, 71 — whose body, ravaged from decades of heavy manual work, is no longer built for chasing sows.

For half a century, he and his wife, Sherry, 67, have run their 260-acre farm here in the upper Catskills, some two hours north of New York City.

Known as Hull-O Farms, it has been in Mr. Hull’s family since his forebear, John Hull, founded it some 240 years and seven generations ago.

It is one of the oldest farms in the country continuously owned and run by the same family. But that lineage is about to end.

The Hulls can no longer handle the strenuous physical work needed to earn enough to keep up with the taxes, insurance, mortgages, barn maintenance and other rising costs, so they are putting the farm on the market.

“We don’t want to leave the land,” Ms. Hull said. “But we’re running out of options.”

The Hulls are part of the graying of America’s farmers.

One in three farmers in the country is 65 or older, and scores of small farms across the country close each year because their aging proprietors don’t have successors.

In New York State alone, 1.8 million acres of farmland are owned by people 65 and over, many of whom are financially unprepared for retirement and often wind up making the quickest and most lucrative move: selling to developers, said David Haight, an official with American Farmland Trust, which connects aspiring farmers with available farmland.

Some 5,000 farms in New York State have been sold for real estate development since 1982, he said.

“Many farming families are in the Hulls’ situation or getting near it,” Mr. Haight said. “They’re land-rich and cash-poor, and they’re saying, ‘What do we do with this family business we’ve created, particularly if we didn’t make the money we anticipated making?’”

To honor the family legacy, the Hulls have kept farming, even as Ms. Hull’s once boundless energy has diminished and Mr. Hull’s body has become riddled with arthritis. The couple says they haven’t been on a family vacation since their honeymoon 48 years ago.

“We have one nostril above water and nothing to live on,” Ms. Hull said. “We have no pension because we’ve put every penny we’ve made back into the farm. I tell people, ‘We’re standing on our 401(k).’ And now, it looks like the farm has to close so we can survive.”

Mr. Hull carries out daily chores including feeding and watering the livestock, growing and harvesting hay and corn, and raising grass-fed cattle, hogs, chickens and pheasant.

He butchers and sells much of the meat at the farm, along with farm-fresh eggs.

“If Frank stops working, he feels he’s letting his relatives down and that the whole family line is broken,” Ms. Hull said. “I know it doesn’t make sense because they’re dead, but you feel like you have a commitment to carry on what every one of them has done successfully in the past.”

Mr. Hull nodded and said: “It’s your heritage and you hate to give it up. I’m stubborn. I don’t like to say uncle.”

In New York, one bright note is that the numbers of young farmers and small farms are growing, as a new generation embraces organic and farm-to-table production and other niche food trends.

The longstanding tradition of aging farmers relying on younger generations to take over the farm, and support them in retirement, is being shaken, said Kacey Deamer with Cornell University’s Small Farms Program, which, along with other groups, is increasingly connecting aging farm owners with nonrelatives looking to farm.

“As people seek different career opportunities and move away from their family farm, relying on children to take over the farm business is not always the answer,” she said.

Each of the Hulls’ four sons grew up working on the farm, but none have wanted to take it over — not even the youngest, Jared, 36, who works on the farm.

Two sons have moved out of state, and the son most likely to take the farm over, Jordon, died in a vehicular accident in 2010. Even while in mourning and arranging for the funeral, the Hulls were still not able to stop the daily work on the farm, Ms. Hull said.

The muddiness of the Hulls’ clay soil has long made farming difficult and has not helped in their efforts to rent their land to other farmers.

The Hulls said they had met with land trust groups to discuss selling their development rights in return for restrictions keeping the land as open space. But the arrangement would not provide enough money to retire on, they said.

A global agriculture market has allowed New York City to become less reliant on surrounding farms. But once, even Manhattan was partly farmland. The last working family farm in Manhattan may well have been the Benedetto farm, which took up a full city block near Broadway and 214th Street in Inwood in the early 1930s, said a local historian, Don Rice, who added that the Benedettos raised livestock, grew vegetables and ran a farm stand. The farm was sold in 1954 and developed soon after.

(A reader, Mitchell Littman of New Rochelle, N.Y., had written to The New York Times asking about the last working farm in Manhattan. His question is part of a project from The Times that invites readers to join in our reporting process.)

The Hulls married shortly after meeting in college — in between corn-cutting and deer hunting season — and became a farming team.

(We have started a new initiative aimed at including our readers more directly in the journalistic process.)

At the time, Mr. Hull was a top breeder of cows and had been running the farm since his teens.

For decades, they were primarily dairy farmers and produced up to 750 gallons of milk a day. But in the late 1980s, with milk prices sagging, they began selling off their 260 milking cows and diversified their farm strategy.

They began offering “farm-stay” guest accommodations attracting families from New York City. The visitors enjoy Ms. Hull’s farm-sourced meals and doing chores. In the fall, there is a corn maze and hay rides. December’s theme is a charming farmhouse Christmas.

These peak tourism times take a toll on Ms. Hull, who a decade ago could knock off 80 meals a weekend on four hours sleep.

For Mr. Hull, the past decade has brought growing injuries and decades-old pain from hand-milking cows, holding struggling horses during breeding and continually twisting in the tractor seat.

He fits in surgeries and procedures between corn, deer and hay season.

“You can see his body is in need of surgery,” Ms. Hull said. “He deserves a day off and not to have to work till he dies.”

Mr. Hull listened and gazed out across the fields.

“Farmers don’t retire,” he said softly, almost to himself.

But his wife keeps telling him will soon have no choice. She said she will keep taking guest reservations while the farm is on the market, and pray for another solution that could perhaps entail selling or renting part of their land.

“We’re still weighing all our options and if anyone has an arrangement that could keep us here, we’re not proud people,” she said. “If not, then it’s God’s will that we’ll have to sell.”

Southeast Asian Games off to a rocky start in the Philippines

CAATSA sanctions against Turkey: Is the genie out of the bottle?