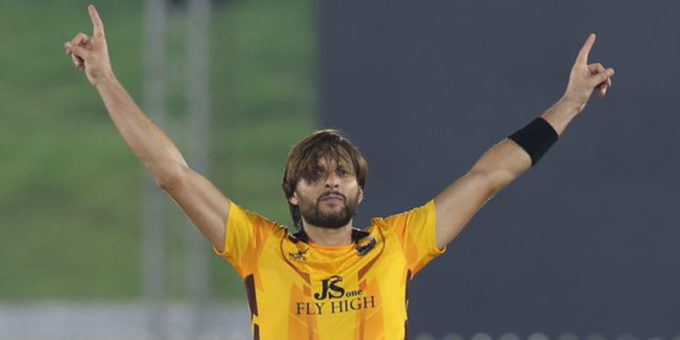 Rawalakot Hawks
defeated the Muzaffarabad Tigers by seven runs in an epic final of the Kashmir
Premier League.

They went off to a decent start with Mohammad Hafeez (29 off
21) and Zeeshan Ashraf (46 off 26) putting up 54 runs for the opening
partnership.

However, Hafeez’s departure triggered Tigers collapse as
they kept on losing wickets at regular intervals.

The Hawks’ skipper Shahid Afridi, who was playing despite
not being fully fit, removed Ashraf and Sohaib Maqsood in the middle overs to
keep his side in the hunt.

All-rounder Hussain Talat also chipped in with three wickets
to stem the flow of runs.

His economical bowling spell, 3/18 in four overs, was
instrumental in laying the platform for the side’s victory.

His innings included five fours and three sixes. Kashif
continued his rich vein of form after notching up a century in the second
eliminator, yesterday.

Openers Bismillah Khan and Umar Amin scored 30 off 19 and 23
off 23, respectively. Meanwhile, Sahibzada Farhan chipped in with 28 runs off
21 balls.

For Tigers, Hafeez and Usama Mir claimed two wickets each.

Journalist On IAF Flight From Kabul

Immunity-Boosting Drink: This Vitamin C-Rich Orange Drink Can Be Made In Just 5 Minutes
2020-07-25