The situation in Afghanistan is “deteriorating”, an Afghan woman refugee, who was among 168 people evacuated from Kabul on a special Air Force flight this morning, told news agency ANI.

The woman said she, her daughter and her two grandchildren had been forced to flee after the Taliban “burnt down my house”, and she thanked the Indian government for rescuing them.

“Situation was deteriorating in Afghanistan, so I came here with my daughter and two grandchildren. Our Indian brothers and sisters came to our rescue. They (the Taliban) burnt down my house. I thank India for helping us,” the unidentified woman said.

“Situation was deteriorating in Afghanistan, so I came here with my daughter & two grandchildren. Our Indian brothers & sisters came to our rescue. They (Taliban) burnt down my house. I thank India for helping us,” says an Afghan national at Hindon Air Force Station, Ghaziabad pic.twitter.com/Pmh1zqZZCB

168 people, including 107 Indians, 24 Afghan Sikhs and two Afghan senators, were on board an Air Force transport aircraft that landed safely at the Hindon airbase in Ghaziabad near Delhi earlier today.

The evacuees included some Indian Sikhs who had taken refugee at a Kabul gurudwara.

ANI visuals also showed an infant among those safely evacuated; in the video the child is in the arms of his/her mother, while a young girl (presumably the older sister) smiles happily and kisses the baby.

#WATCH | An infant was among the 168 people evacuated from Afghanistan’s Kabul to Ghaziabad on an Indian Air Force’s C-17 aircraft pic.twitter.com/DoR6ppHi4h

Photographs also showed a second infant was on board the plane; the child was also safe in his/her mother’s arms, with the father standing by their side, as the young family waits to be processed. 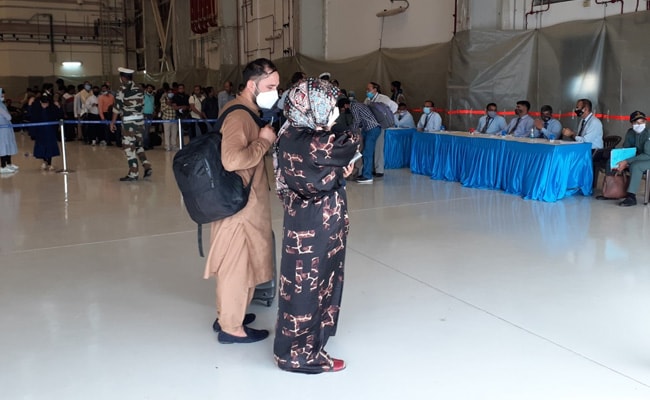 A few hours before the Air Force flight landed, three others – operated by Air India, IndiGo and Vistara – carrying evacuees from Afghanistan touched down at the national capital.

The flights were bringing back people evacuated from Kabul earlier this week and flown first to Dushanbe in Tajikistan and Doha in Qatar, due to safety concerns over flight routes out of Afghanistan.

All evacuees will be given a RT-PCR test in view of the Covid pandemic and Afghan nationals will also be vaccinated against polio, the government has said.

India has been allowed to operate two flights per day from Kabul to evacuate its citizens and those of other countries stranded in Afghanistan, ANI has said, quoting government sources.

Several of the 168 people flown back by the Air Force today were among 150 picked up by the Taliban yesterday, during a chaotic few hours that began with local reports that Indians had been abducted.

Government sources later clarified the group had been taken for routine questioning and checking of travel documents ahead of their evacuation.

Foreign Minister S Jaishankar this week said the government is “very carefully” monitoring the situation in Kabul and Afghanistan, but that the immediate focus is on safely evacuating all citizens.

The Taliban took effective control of Afghanistan last Sunday, after President Ashraf Ghani fled and the group walked into capital Kabul with no opposition. This was after a staggeringly fast rout of major cities following two decades of war that has claimed hundreds of thousands of lives.

Feared for its brutal and oppressive reign two decades ago, the group has tried to present a more moderate image by claiming, for instance, that women will have rights, including to education and work, and that the media will be independent and free.

But violent response to protests – several were killed after Taliban fighters opened fire – and news a female Afghan journalist has been barred from working – suggest the ‘moderate’ stance may not last.