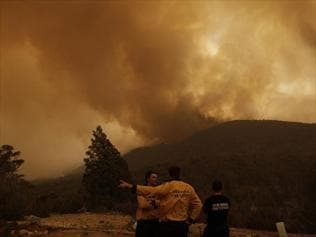 Residents in the southern tip of the ACT are being urged to remain vigilant to the threat of bushfire, although conditions have eased.

The Orroral Valley bushfire was on Saturday afternoon downgraded from emergency to “watch and act” after southern ACT residents were earlier warned the 55,000-hectare fire could pose a threat to lives.

“Fire activity has eased across the fire ground,” the ACT’s Emergency Services Agency said in a statement on Sunday.

“However, falling trees remain a risk.”

“Conditions can still change and get worse,” the agency said.

Temperatures in the nation’s capital are expected to be slightly cooler on Sunday after topping 40C for two consecutive days, hitting 42.7C in Canberra on Saturday.

Chief Minister Andrew Barr on Saturday said the state of emergency in the territory is expected to remain until at least Monday.