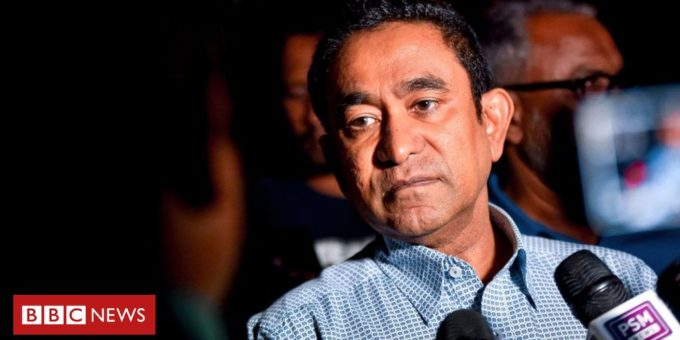 Former Maldives President Abdulla Yameen has been sentenced to five years in prison for money laundering.

Prosecutors said the money, fees for leasing land for tourism development, went instead to Yameen’s bank account. He denied the accusations.

The controversial former president served for five years until his surprise defeat in the 2018 election.

Widely seen as pro-China and accused of crushing dissent in the archipelago, Yameen was also ordered by the court in the capital, Male, to pay a fine of $5m. He is expected to appeal.

Judge Ali Rasheed, who headed a panel of five judges trying the case, said it had been established beyond any reasonable doubt that Yameen had taken money that he knew was embezzled from the state.

Dozens of the former president’s supporters gathered outside the court, saying his was innocent.

The Maldives is a key battleground in the rivalry between China and India. Famous for its 26 coral atolls and 1,192 islands, it is home to more than 400,000 people.

Tourism is a vital part of its economy but there are fears for the archipelago’s future because of climate change.

Opinion | The Death of the Black Utopia

In Commuting Roger Stone’s Sentence, Trump Goes Where Nixon Would Not
2020-07-11

Claire Danes on The Essex Serpent: ‘I think the serpent is a symbol for people’s anxiety’
2022-05-11