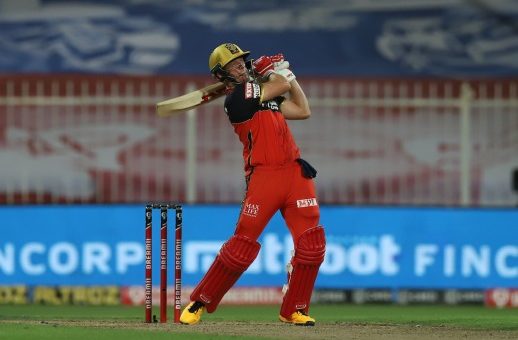 Royal Challengers Bangalore (RCB) romped to a massive 82-run victory over Kolkata Knight Riders (KKR) on Monday in Sharjah on the back of an AB de Villiers masterclass of 73 not out from just 33 balls.

De Villiers’ partnership with RCB skipper Virat Kohli, who remained unbeaten on 33 off 28, for the third wicket that was worth 100 runs in just 7.4 overs took RCB from a steady start to an imposing total of 194/2. KKR, in reply, capitulated quite early in their chase, losing key wickets of Shubman Gill, Eoin Morgan and Andre Russell in the space of two overs, and were restricted to 112/9.

De Villiers came in with RCB 94/2 in 12.2 overs and a platform set for the final-overs assault. The South African took special liking to the KKR pacers, hitting Kamlesh Nagarkoti for two sixes and a four in the 16th over followed by two more sixes and a boundary off Pat Cummins in the next.

Russell, the designated death bowler for KKR this season, also went the distance as the 18th over began with de Villiers hammering the big West Indian for a six and a four. The final over, also bowled by Russell, fetched 17 runs for RCB with de Villiers scoring 15 of those.

Such was the batsman’s dominance that Kohli was reduced to a mere spectator at the other end as de Villiers farmed most of the strike.

The win lifted RCB to second spot with 10 points from seven matches, while KKR dropped one place down to fourth with eight points as the league reached the halfway stage.

When an Ariel vintage motorcycle was gifted to Ranveer Singh

Ananya Panday to make her OTT debut with Call Me Bae; to be produced by Karan Johar’s Dharmatic Entertainment : Bollywood News
2022-09-26