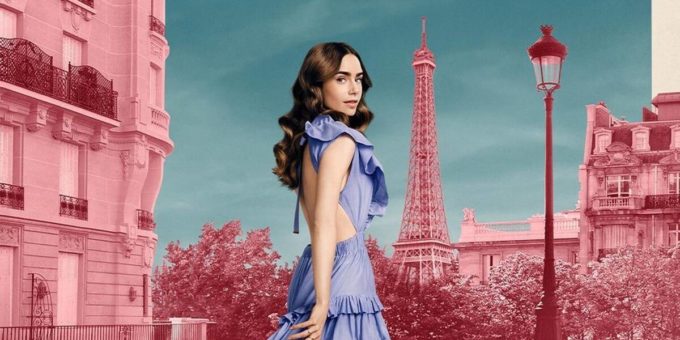 Much has already been said about the wildly popular Netflix original series Emily in Paris, but yet, not enough. The show, which recently came out with its second season and has already announced two more seasons, stars Lily J. Collins as Emily, an American marketing professional who is in Paris for a year. She works in a luxury marketing firm ‘Savoir’, and dresses the part.

Dramatic, colourful, OTT, hyper-feminine are some of the adjectives that can be used to describe Emily’s sometimes-gaudy outfits, styled by legendary stylist Patricia Field, who also styled the iconic character of Carrie Bradshaw from Sex and the City.

Above all, it was the polka dotted, ruffled, bright red tulle dresses in Season 2 that contributed massively to the sartorial impact the show’s widely-debated wardrobe had. But that’s not all. So lets take a look at some of Lily Collins’ dramatic outfits from Emily in Paris.

Emily wore a Dolce & Gabbana ruched patchwork silk dress paired with a Louboutin Carabaca mini tote bag, and a Marimekko hat, made way back in 1966 by Annika Rimala.

A look for when you want to party with your friends in St. Tropez and then gatecrash a celebrity designer’s yacht, this lilac ruffled number with an uneven hem is from Magali Pascal. She has accessorised the look with a bright orange tote from Carel Paris, Terry de Haviland heels, and Miumiu sunglasses.

Emily teleported herself back to the ’60s with this off-shoulder heart motif red and white dress complete with a towering puff styled with a hairband and a Roger Vivier mini handbag.

One of her best looks from the show was in a bright red tulle gown by Giambattista Valli x H&M collaboration that featured a plunging neckline and a voluminous silhouette. The look was completed with an elegant hairdo and bold lips.

For her classy, outdoor, French-style birthday dinner, Emily opted for a black bodycon with an oversized pink bow from ROTATE Birger Christensen and a vibrant coat from Rianna and Nina.

Here, Emily is wearing a lace and silk taffeta one-shoulder dress by Vassilis Zoulias styled with a wide, striped belt at the waist.

Beer Trends Expected To Be Popular In The Year 2022