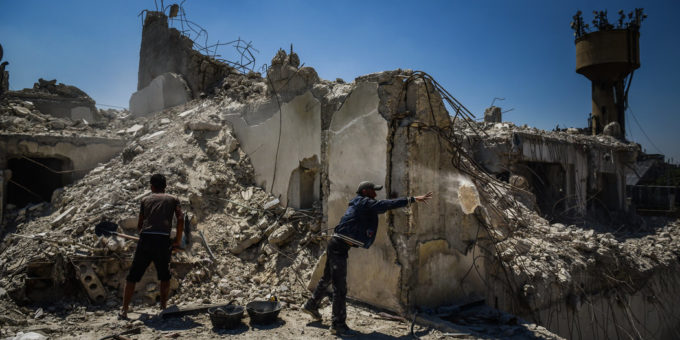 “Safety is back in Syria,” proclaimed one billboard.

But safety had proved elusive for Um Ahmad, 28, who was sitting on her stoop with her sister at dusk, surrounded by shattered buildings.

Their husbands were both missing, the two women said, detained as pro-government forces advanced on east Aleppo in 2015.

Our minders had been drawing closer, and at this they pounced. Rana, who never gave her last name, told Um Ahmad that it was more complicated than she was letting on. She shouldn’t be saying these things to journalists.

“Should we lie? That’s what happened,” Um Ahmad said. At this, Rana led her into the kitchen, where I could hear raised voices. She was quiet when she came back.

Later, I complained to the information minister about the profusion of chaperones.

You have to understand, he said. We’re not American. We do it differently. And everyone here assumes you’re spies.

When it was time to leave Syria, military-intelligence escorts accompanied us to the Lebanese border. We had to pull over four times on the highway because their car kept breaking down; apparently, car maintenance wasn’t in the budget. Every time they tried to get back on the road, the trunk of their scratched-up black sedan would pop open again with impeccable slapstick timing.

It was the first time any of them had veered off script all week.

Even After 8 Years of War, Still the Best

What does victory look like? At least half a million dead, more than 11 million severed from their homes. Rubble for cities, ghosts for neighbors. Shopping malls for some, homegrown cucumbers for others.

What the Middle East needs for a sustainable future, according to UN report