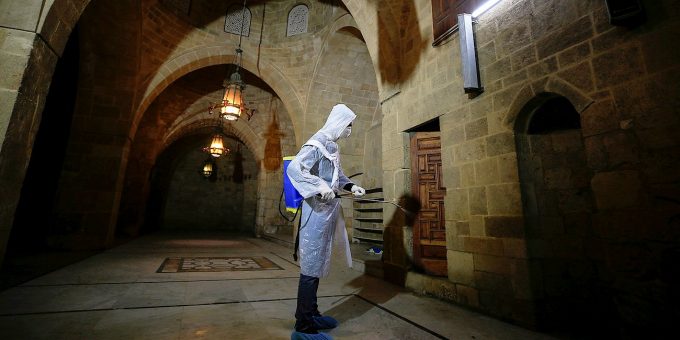 BEIRUT: Lebanon has reported its third death from the coronavirus. A 79-year-old man with cancer died on Wednesday while being treated in a hospital in Jbeil.

He was sharing the room with a man, whose infection was not yet been confirmed.

Doctors’ syndicate chief Sharaf Abu Sharaf said: “There are 15 nurses and two doctors being quarantined at home who have not showed any symptoms.”

The streets have been almost empty as all entertainment and recreational facilities in the country have shut. The Lebanese Cabinet has doubled internet speed and capacity for Ogero users until the end of April, to encourage them to work and study at home.

Mohammed, a taxi driver in Beirut, told Arab News: “People have stopped going to malls and Beirut souks are empty. They are even refusing to take a cab and are walking instead.”

Salam, a saleswoman in Sodeco, said: “Buying clothes is no longer a priority as people are afraid of the coronavirus. We are making sure to disinfect and sterilize the shop everyday but it seems like we will be closing soon.”

The Lebanese General Directorate of General Security has begun implementing the decision of the Ministerial Committee for Combating Coronavirus to close all border crossing points with Syria, preventing entry without residence permits.

The directorate has also banned the Lebanese from entering Syria, where all border crossing points are expected to close four days after the issuance of the decision.

On Wednesday, the Lebanese prime minister stopped all flights between Italy, South Korea, Iran and China for a week.

Lebanon has also banned the entry of passengers from France, Egypt, Syria, Iraq, Germany, Spain and the UK.

Diplomats, NGO workers, UNIFIL members, Lebanese citizens and members of Lebanese families who have not yet obtained their nationality or residence permits were granted a deadline of four days, until March 16, to return to Lebanon.

The arrival of the last flight from Iran on Wednesday at Rafic Hariri International Airport, carrying 105 passengers, provoked wide criticism on social media, where people blamed Hezbollah and the authorities for allowing the entry of people from an affected country.

The first coronavirus case in Lebanon was a woman who arrived from the Iranian city of Qom on Feb. 20.

The airport’s general security bureau ascertained that “passengers were tested” and denied that “people from a certain party entered the airport to receive the passengers and get them out without being tested.”

Regarding pictures that have been circulating on social media, the bureau said: “The pictures are fabricated and can harm the Lebanese interests and the reputation of the airport.”

The Banque du Liban said: “Banknotes, according to the World Health Organization, are like anything else we touch during the day and thus people should wash their hands after handling money.”

According to the German Central Bank, the risk of handling banknotes is no greater than touching other things, such as a doorknob or light switches and that Banque Du Liban is taking all precautious measures regarding the banknotes deposited to prevent the spread of the virus.

The Ministry of Social Affairs has announced a new plan to halt the spread of the virus in the camps of Syrian refugees, following a meeting attended by international organizations. The meeting decided “to organize awareness-raising campaigns and provide supplies to clean and sterilize refugee camps in cooperation with the UN.”

Bassel Al-Hujairi, mayor of the border town of Ersal, which is home to over 60,000 Syrian refugees, said: “No coronavirus cases have been reported in Ersal so far. The major challenge we are facing is to limit gatherings in camps. We have closed the public park and canceled all gatherings.”

Al-Hujairi added: “The Lebanese Army has set up a perimeter along the borders in the eastern mountain range near Ersal. But the danger comes from border crossing points outside the Ersal borders, which made us stop refugees from going to Syria, to protect them and the people of Ersal.”

Travel and the Coronavirus: Answers to Your Top Questions

Surbhi Chandna on Sanjivani’s end: It was a fulfilling experience