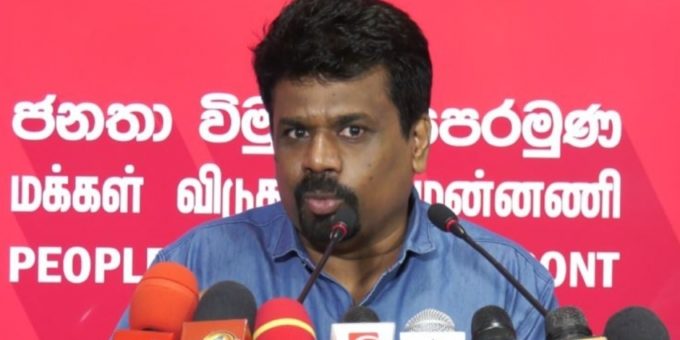 Speaking at the Parliament, Dissanayake stated that the Rajapaksas represent four positions in the cabinet and out of the Rs. 5,200 million reserved in the Appropriation Bill, Rs. 3,470 million will be distributed among one family, which is 64% of the total Government expenditure.

Inquiring as to whether or not the Government consider education and health as a core development strategies of Sri Lanka, Dissanayake questioned the reason for such sectors to have allocated lesser funds.

Speaking further, the JVP Leader pointed out that the worst collapse of foreign reserves in the country is taking place now, as of October 31st, the foreign reserves of the country standing at 2.2 Billion, and the Minister of Finance stating that he expects to increase exports revenue by USD 19 billion this year, from USD 11.9 billion last year.

He added that this goal is completely unrealistic as last year the Government income and the expected income had a disparity of 20%, and if the goal is indeed reaches, it cannot be prevented from letting the importations from growing by nearly USD 20 billion.

The JVP Leader also mentioned that the Appropriation Bill for the year 2022 fails to address some of the most important issues that the country is facing right now, including having no solution to short term problems of people, such as the fertilizer issue, having no long term economic plan for the development of the country and pointed out that the statistics mentioned in the Appropriation Bill are unrealistic and untrue.

From preventing cancer to flu, benefits of having turmeric in winters

Tanhaji Box Office: Ajay Devgn-starrer No Longer in Competition with any Film, Continues to Reign over Cinemas
2020-01-18

Jana Duggar Gets Slammed By Fans: Everyone In Your Family Looks the Same!
2022-01-13