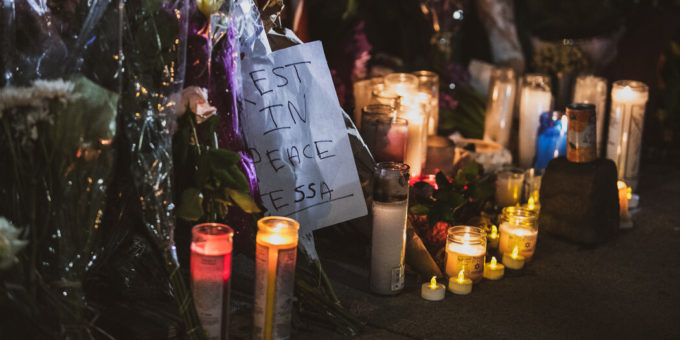 Two years after Tessa Majors, an 18-year-old freshman at Barnard College, was fatally stabbed during an evening walk in Morningside Park, a third teenager pleaded guilty to his role in the murder.

The plea in State Supreme Court in Manhattan brings the case — which deeply rattled Morningside Heights and sent waves of grief across a college campus — close to a conclusion. The story of three Black teenagers accused of attacking a white student in a secluded park triggered waves of debate over race, class and safety in the Upper Manhattan neighborhood where Ms. Majors spent her last moments.

The three teenagers charged in the crime were middle school classmates who were between the ages of 13 and 14 at the time.

Rashaun Weaver, now 16, was charged as an adult and was the attacker who prosecutors said wielded the knife that killed Ms. Majors in December 2019. In court, Mr. Weaver, who pleaded guilty to second-degree murder and first-degree robbery, admitted to delivering the series of strikes to Ms. Majors’s chest that ended her life.

As part of the deal with prosecutors, Mr. Weaver, who wore a green long-sleeved shirt and face mask in court, also pleaded guilty to two other similar robberies. He will face 14 years to life in prison for the three crimes at his sentencing hearing on Jan. 19, Justice Robert Mandelbaum said.

The two other teenagers involved had previously pleaded guilty.

“It is clear, your honor, that no sentence or outcome will bring back Tessa Majors,” a prosecutor, Matthew Bogdanos, said. But by entering the plea, he added, Mr. Weaver “will save the Majors family from the trauma of a trial, and that counts for something.”

As the teenager was escorted out of the courtroom, a friend shouted, “I love you, bro.”

Mr. Lichtman and prosecutors both noted that Mr. Weaver’s upbringing was marred by struggles. His mother had her first child when she was 13, his father was incarcerated at the time of his birth and several other immediate family members had been convicted of crimes, they said.

“Sometimes I think it gets lost when we talk about all these horrific things. We forget that this doesn’t just happen out of the blue,” Mr. Lichtman said. “It takes a village, so to speak, to make what happened here.”

The prosecutors considered Mr. Weaver’s troubled childhood when crafting a sentencing recommendation, Mr. Bogdanos said. But the teenager had also been involved in more than a dozen assaults of counselors and other incidents at his detention center since April 2020, he said, which needed to be weighed as well.

Inman Majors, the father of Ms. Majors, declined to comment as he left the courtroom. But prosecutors said the deal was acceptable to the family.

Mr. Weaver was the final teenager to plead guilty.

A second boy, who was 13 at the time, confessed when he was interviewed by the police the day after the stabbing. He identified the other teenagers, pleaded guilty to robbery and was sentenced last year to up to 18 months in a juvenile detention facility. (The New York Times is withholding his name because he is a minor and was not charged as an adult.)

Last month, Luchiano Lewis, 16, was sentenced to nine years to life in prison after he pleaded guilty to second-degree murder. On several occasions before the murder, Mr. Lewis said, Mr. Weaver had encouraged him to join him on trips to Morningside Park to find people to rob.

Prosecutors have said robbery was the three teenagers’ mission when they entered the park on the December evening and encountered Ms. Majors, a student from Virginia who sang and played bass guitar in a band that had just performed its first New York gig.

Ms. Majors was not the group’s initial target, but the teenagers turned their attention to her when they spotted her walking up a set of stairs, prosecutors said.

Video footage that was later recovered from the scene showed Ms. Majors struggling with them.

She bit Mr. Weaver’s hand as she tried to escape, prosecutors have said, but Mr. Lewis restrained her in a headlock while Mr. Weaver stabbed her. One thrust pierced her heart. (When he pleaded guilty, Mr. Lewis did not describe having physical contact with Ms. Majors and said he did not know that she was stabbed until reading the news.)

Mr. Weaver was arrested later that December after an intensive manhunt, which included the unusual step in a case involving a minor of the police releasing images of the attacker and asking the public to turn him in.

He was initially released hours after questioning, but charged two months later as an adult — which state law allows prosecutors to do for certain violent crimes at their discretion. He pleaded not guilty at the time and was ordered to be held without bail at a juvenile detention center.

The teenager’s own statements also tied him to the killing. In a recorded conversation with his father, who was in prison, Mr. Weaver said that he stabbed Ms. Majors because “she was hanging on to her phone” as the group tried to steal it, according to the criminal complaint.

As part of the agreement with prosecutors, Mr. Weaver pleaded guilty to two other crimes.

Four days before Ms. Majors was killed, he robbed an 18-year-old man of his phone at knife point, prosecutors said. And on the day he was arrested in February 2020, they said, Mr. Weaver had been part of a group who assaulted another man and stole his belongings.

Join Another Party Or Start Your Own, Congress Infighting Worsens
2020-11-18