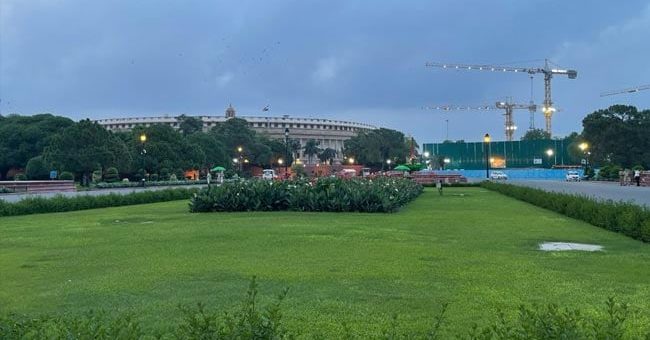 According to the CPWD, Central Vista houses only 22 of the 51 ministries of the Centre. (File)

The Delhi forest department has exempted an area of 6.63 hectares for the construction of the Vice-President Enclave under the Central Vista redevelopment project and 396 trees will be transplanted from the project site.

The proposed Vice-President Enclave will come up next to the North Block and the Rashtrapati Bhavan, for which the Central Public Works Department (CPWD) has estimated a cost of around Rs 214 crore.

According to a notification issued on January 14, there are 717 trees at the project site, of which 321 will be retained and 396 transplanted.

While 135 trees will be transplanted within the project site, the CPWD has been asked to transplant 261 trees at the NTPC Eco Park in Badarpur with their own funds.

“In exercise of the powers conferred by section 29 of the Delhi Preservation of Trees Act, 1994, the Government of National Capital Territory of Delhi, hereby, in public interest exempts an area of 6.63 ha. approx. for development/redevelopment of Vice-President Enclave,” the notification read.  The CPWD has also been asked to plant 3,960 saplings of Neem, Amaltas, Peepal, Pilkhan, Gular, Bargad, Arjun and other native tree species at the NTPC Eco Park as compensatory plantation and deposit an amount of Rs 2.25 crore for the maintenance of the saplings for a period of seven years.

The redevelopment of the Central Vista, the nation’s power corridor, envisages a new Parliament building, a common central secretariat, revamping of the three-km Rajpath from the Rashtrapati Bhavan to the India Gate, a new office and a residence for the prime minister, and a new Vice-President Enclave.

According to the CPWD, Central Vista houses only 22 of the 51 ministries of the Centre. In some cases, a ministry has offices split between different buildings. This scattering of ministry offices across Delhi hampers the efficiency of administration and increases operational costs and energy usage.

The consolidated common central secretariat will have modern offices and facilities for all the 51 ministries.