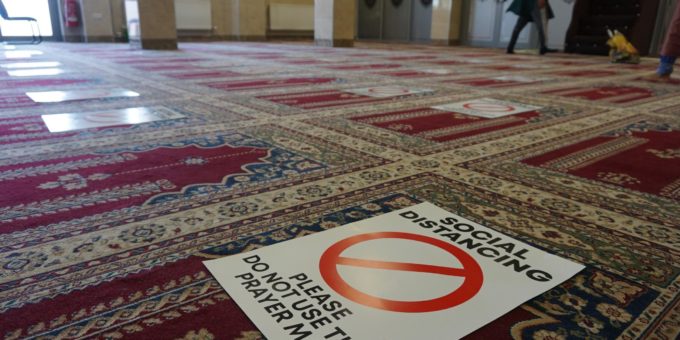 Mosques have hosted their first socially distanced Eid prayers across the region.

In a raft of measures mosques have been strictly following for the past few weeks all worshippers were told to bring their own prayer mats and wear masks.

Last night’s announcement by the Health Secretary Matt Hancock that people in Northern towns and cities would be banned from mixing with other households (apart from those in their support bubbles) in private homes or gardens was not far from people’s minds.

In Blackburn, mosque timings were staggered with prayers being performed between 5.45am and 9.30am and attendees were only permitted to pray alongside family members.

It has been extremely difficult time for mosques who have been at the forefront or breaking down misconceptions from the wider community. With media coverage centering on Muslims, one mosque was hesistant being pictured even when they were fully adhering to all the guidelines. Others opened their doors and were keen to show their systems at work and the contribution of volunteers.

Outside the Madina Masjid on Oak Street volunteers were on hand to enforce the rules and worshippers were turned away if they were not wearing a mask. All attendees were told to fill in their details at entry and under 12s were told they could not attend.

No mask no entry and please wash your hands

Inside, the mosque had strict enforcement of social distancing rules including hand sanitisers and once prayers were completed attendees were told to go straight home and not stand outside the building.

The Raza Masjid closed its doors once capcity had been reached

At the Raza Masjid, the doors were locked once capacity had been reached. As prayers were completed, unlike years gone by there were no hand-shakes or hugs. Whilst things may have changed many did not let the current situation dampen their spirits.

Volunteers at the Masjid Anisul Islam on Tory Street were encouraging people to keep to strict guidelines throughout the stay. Many worshippers only arrived 10-15 minutes before the prayers which lasted no more than ten minutes. Once prayers had been said attendees dispersed. As the mosque had a car park, additional prayers were said outside.

Yasin Patel, Masjid e Anisul Islam Volunteers Co-ordinator thanked attendees for adhering to all guidelines and helpers for following all the instructions.

Is the EU, the world’s premier trade and soft power, taking a reality check on China?