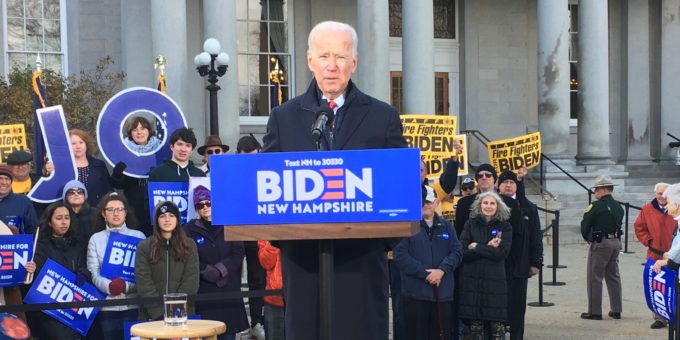 This weekly column on the next race for the White House usually zeroes in on the burgeoning contest for the 2024 GOP presidential nomination.

But a poll released in recent days that spotlighted President Biden’s flagging support should he run for reelection in 2024 in New Hampshire, the state that for a century’s held the first primary in the presidential nominating calendar, piqued our interest.

Thirty-seven percent of likely Democratic primary voters in 2024 questioned in the University of New Hampshire’s (UNH) latest Granite State survey said that they’d vote for Biden if the primary were held today, a drop of 12 points from UNH’s previous poll in July. Fifty-two percent of those questioned said they were unsure, up nine points, with 11% saying they’d vote for another candidate.

BIDEN’S POLL NUMBERS WORSE THAT OBAMA, BUSH, CLINTON, BUT BETTER THAN TRUMP, AT THIS POINT IN THEIR PRESIDENCIES

Asked if they’d like to see the president run unopposed in 2024 or face a primary challenge, 45% said they’d like to see Biden face a primary challenger, up 16 points from July. Those preferring the president to run unopposed in the next Democratic presidential primary dropped nine points from July, to 29% in the latest survey, which was conducted Oct. 14-18.

The latest numbers from the first-in-the-nation presidential primary state come as Biden’s approval ratings have taken a beating the past two and a half months, in the wake of Biden’s much-criticized handling of the turbulent U.S. exit from Afghanistan and following a surge in COVID-19 cases due to the spread of the highly infectious delta variant as the nation continues to combat the coronavirus, the worst pandemic to strike the globe in a century. The president’s deteriorating numbers were also compounded by the latest surge of migrants trying to cross into the U.S. along the southern border with Mexico, as well as a rise in inflation.

There’s been intense speculation – dating back to the launch of his successful 2020 White House bid two and a half years ago – whether the now-78-year-old Biden (the president turns 79 next month) would run for a second term. Biden made history last November when he became the oldest person ever elected president. If he campaigns for reelection in 2024 and wins, Biden would be 82 at his second inaugural and 86 at the end of his second term.

Asked in March at the first formal news conference of his presidency about his 2024 plans, Biden said, “My answer is yes. I plan on running for reelection. That’s my expectation.”

As we always caution, take these very early polls in the next White House race with plenty of skepticism.

Also remember that while Biden won New Hampshire – a key general election battleground state – over then President Donald Trump by seven points last November, nine months earlier he came in a very disappointing fifth in the state’s presidential primary. And keep in mind that there’s a growing push within the Democratic party to upend the current presidential nominating calendar, which threatens New Hampshire’s cherished position as the lead off primary.

Most in GOP still want Trump to run again

A majority of Americans questioned in the latest Quinnipiac University national poll say they don’t want to see former President Trump run for the White House again in 2024, but the vast majority of Republicans welcome another Trump campaign.

By a 58%-35% margin, Americans gave a thumbs down to another Trump presidential bid, according to the Quinnipiac survey, which was conducted Oct. 15-18. Democrats, as expected, were overwhelmingly opposed to another Trump run, with Independents opposed by the same 58%-35% margin seen in the overall response.

But 78% of Republicans questioned in the poll said they’d like to see the former president make another run for the White House, with 16% opposed.

Nine months removed from the White House, the 75-year old Trump remains incredibly popular with Republican voters, as he continues to hold much sway over the party. Trump remains a GOP kingmaker and repeatedly flirts with a 2024 run while he keeps making unfounded claims that the 2020 presidential election was “rigged” and “stolen.”

Is DeSantis more popular than Trump among NH Republicans?

While the vast majority of Republicans say they’d like to see Trump run again, his support remains high – but drops – in 2024 GOP nomination horse race questions.

Trump grabs 56% support in the UNH poll, when they ask an opened-ended question about whom self-declared Republicans would support in the 2024 New Hampshire primary, which is two years and a quarter years away. Florida Gov. Ron DeSantis was a distant second, at 13%, with everyone else in the single digits.

When provided a list of potential GOP 2024 contenders, 43% of likely Republican presidential primary voters said they’d vote for Trump, with DeSantis at 18% and everyone else in single digits.

DeSantis, whose standing among conservatives has skyrocketed over the past year and a half thanks in large part to his combative push back against COVID-19 restrictions amid the pandemic, holds a slight edge over Trump in favorability among Republican voters.

The Florida governor scored a net favorability rating of plus 62 in the UNH poll, with the former president at plus 54.

Georgia Lt. Gov. Geoff Duncan says he’s getting “very little push back” from fellow Republicans over his burgeoning effort to reboot what he hopes will be a post-Trump GOP.

Georgia’s lieutenant governor made his comments in a national exclusive interview with Fox News and during an address to an audience at the New Hampshire Institute of Politics on Tuesday, where Duncan kicked off the inaugural event to sell “GOP 2.0,” the idea behind his new book and his evolving push to fix a Republican Party that he says has been damaged by former President Trump.

“The reality is that Donald Trump has a zero percent chance of ever being the president of the United States again,”  Duncan argued. “It will continue to become more and more obvious to folks across the country that this is an unwinnable strategy, this divisive rancor, this divisive tone that alienates is not a winnable strategy.”

Duncan predicted that “there’s not going to be this overwhelming groundswell for election fraud and conspiracy theories and divisive rancor. Republicans are going to wake up across this country and just simply want to win. And I think GOP 2.0 can do that. What we’re seeing is a short term sugar high in Donald Trump. And I guarantee you beyond a shadow of doubt that Trump fever is going to break.”