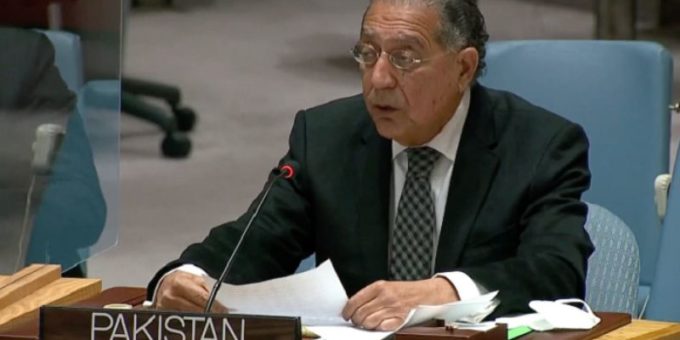 Pakistan continued to push for the Kashmiri people’s right to self-determination in 2021 in a determined bid to advance the cause of their freedom from India’s yoke, Ambassador Munir Akram has said while recounting key achievements at the United Nations on the multilateral diplomatic front.

“2021 was a successful year for Pakistan’s multilateral diplomacy here at the United Nations,” he said in a New Year message released on Saturday.

Led by the ambassador, the Pakistan Mission to the UN missed no opportunity to raise a voice against India’s military siege, illegal occupation in Jammu and Kashmir, and massive human rights violations.

“We continued to make the legal, political and moral case for Kashmiris freedom struggle. We underscored that under international law they have the right to resist, with all means at their disposal, and attain their inalienable right to self-determination,” the Pakistani envoy said.

The case, he added, was also contained in a Pakistan-sponsored resolution on the universal realisation of the right of peoples to self-determination which was adopted by consensus by the UN General Assembly.

In another accomplishment, Pakistan successfully concluded its presidency of the Economic and Social Council (ECOSOC), having also adopted the Ministerial Declaration of the High level Political Forum HLPF by consensus – an indication of convergence on the global recovery and SDG (Sustainable Development Goals) agenda.

“We are determined to play a constructive role as a Chairman of Group of 77 (developing countries) for the year 2022,” the ambassador said.

As the next Chair of the Group of 77 and China, he said Pakistan hoped to work with members of the Group to promote such a development agenda, including debt restructuring, redistribution of the 650 billion new SDRs to developing countries, larger concessional financing, mobilisation of the $100 billion in annual climate finance by the developed countries, ending the billions in illicit financial flows from the developing countries and the return of their stolen assets, and the creation of an equitable and open trading system and a fair international tax regime.

Pakistan also took the lead on combating disinformation through Pakistan-sponsored resolution which was adopted with consensus, it was pointed out.

In addition, Pakistan raised the issue of Islamophobia in the UN. “Our resolution on inter-religious and inter-cultural dialogue, which calls for respect for religious symbols and refers to legitimate restrictions on freedom of expression, was adopted by an overwhelming majority by the general assembly.”

“2021 proved to be an important year for peace process in Afghanistan,” ambassador Akram said.

“We continue to promote and highlight Pakistan’s key role in facilitating the Afghan’s humanitarian assistance and our efforts to ensure a lasting peace in the region.”

As one of the top troop contributors to UN Peacekeeping, Pakistan continued to serve to keep peace in far-flung missions.

Pakistan demonstrated a strong commitment to the peacekeeping ministerial process, the ambassador said.

Pakistan consistently advocated for a strong people-centric international response to Covid-19 based on solidarity and cooperation to support global economic recovery, achievement of the SDGs, while addressing the challenges faced by developing countries.

“We have also made a strong call for an equitable and universal access to vaccine, while giving priority to vulnerable groups,” he said.

Power tariffs likely to go up as new year rolls out

coronavirus vaccine: WHO hopeful Covid-19 vaccines could be available before end of this year
2020-06-18