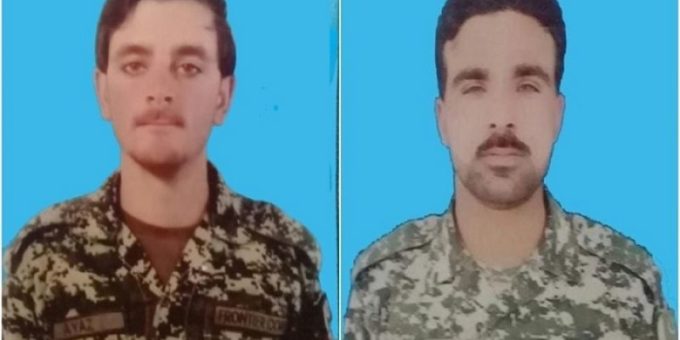 Two Pakistan Army sepoys were martyred in an exchange of fire with terrorists from across the Afghan border in Khyber Pakhtunkhwa’s Bajaur district, the military’s media wing said in a statement on Sunday.

“Terrorists from inside Afghanistan across the international border opened fire on a military post in Bajaur district,” the Inter-Services Public Relations (ISPR) said, adding that Pakistani troops had responded in a befitting manner.

“As per intelligence reports, due to [the] fire of Pakistan Army troops, two to three terrorists got killed and three to four terrorists got injured,” read the statement.

The martyred soldiers were identified as Sepoy Jamal, 28, from Mardan, and Sepoy Ayaz, 21, from Chitral.

The ISPR said Pakistan “strongly condemns the use of Afghan soil by terrorists for activities against Pakistan and expects that [the] existing and future setup in Afghanistan will not allow such activities”.

In a similar incident, a paramilitary soldier was martyred on Thursday when terrorists attacked a check-post in the Three Baman Sector from across the Afghan border.

On Friday, ISPR Director General Maj Gen Babar Iftikhar had emphasised that the situation on the Pakistan-Afghanistan border was “normal and under control”, while Pakistan’s side was “secure”.